Poll: Trump and Clinton Are Tied. In Utah. At 26 Percent. 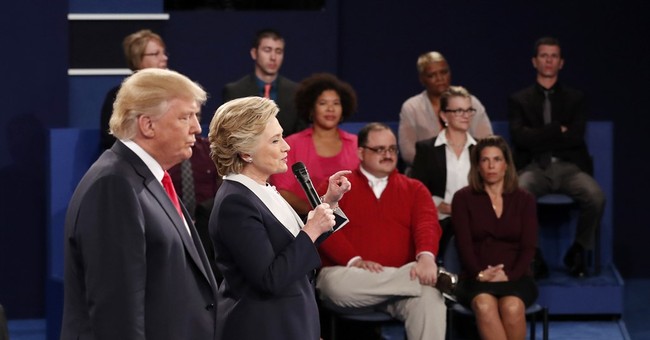 The deeply conservative people of Utah value decency and honesty, so naturally they abhor both the ignorant, boorish neanderthal and the corrupt, power-mad liar America's two major parties have seen fit to nominate for president. (For the latest on Trump's disgustingness, click here, or click here for new evidence of lies and corruption about the Clinton Foundation). Given the abiding distaste for these two human beings among Utah's electorate, this poll shouldn't necessarily come as a great surprise -- but given the dynamics of modern American politics, it's still pretty jaw-dropping:

The Republican and Democratic nominees combine for barely half of the electorate with Evan McMullin nearly tied for the lead. If you combined McMullin and Johnson's support, they'd lead Trump or Hillary by double digits, according to this poll. It's just one survey, so some skepticism is warranted, but the result is plausible. Clinton has never had any real traction in the religious and conservative state, where Donald Trump's "p***y grab" tape likely went over like a lead balloon. It's no coincidence that there's an especially concentrated collection of Republicans who've rejected Trump among Utah's elected officials -- to say nothing of Mitt Romney. What's incredible about McMullin's competitiveness is that only about half of Utahans are aware of his candidacy (he's a Mormon former US intelligence officer running on a traditionally conservative platform). If he can boost his name recognition in the state, it's not impossible to see him pulling off a (still improbable) win out there, particularly if the Trump-allergic Romney lends a hand.  Meanwhile, the Salt Lake Tribune has endorsed Hillary Clinton for president:

This election presents the two most unpopular candidates in recent history. One has developed a reputation for secrecy and dishonesty. The other built a campaign on insults and bigoted statements, finally losing any right to be taken seriously with the recent release of a video in which he was heard to brag about his ability to get away with sexually assaulting women. There is certainly not a perfect choice but, at this point, the only candidate who comes close to being qualified and fit for the post is Hillary Clinton...Utah Republicans were perceptive enough to reject Trump in their March presidential caucus voting. Were they to support Clinton now, even by the narrowest of pluralities, it would send a strong message to the Republican Party to turn their backs on Trumpism and to work with Clinton where they can, rather than devote themselves to blocking her every move.

I saw some oohing and ahhing over this editorial on social media, but there's less to it than meets the eye. This newspaper endorsed Barack Obama for president. Twice. Including over Mitt Romney, who carried every county in the state, winning nearly three-quarters of the popular vote there.  So this isn't exactly a newspaper that's in touch with its readership.  Mrs. Clinton's competitiveness in Utah has nothing to do with her, and everything to do with Donald Trump.  Despite the close contest there, I can't bring myself to call Utah a swing state, because it's not.  It's a ruby red state in a wacky year.  But in the bona fide battleground state of Ohio, here's a "yikes" number for Republicans:

That's a major outlier at this stage, although the survey's Senate margin (Portman +12) isn't too far off from other polling. Speaking of outliers, I'll leave you with breaking news from the only major poll in the country that Trump fans have been touting lately:

Trump has fallen behind Clinton in our daily tracking poll for the first time since early September https://t.co/WeKCl3sQra pic.twitter.com/gxKWYavA7n

Maybe just a few more attacks on Republicans will turn things around, Donald.  Snark aside, this new Trump ad is pretty good:

NEW??AD: @HillaryClinton only cares about power, money and herself. @realDonaldTrump is in this for YOU! pic.twitter.com/xRG9MxspDh