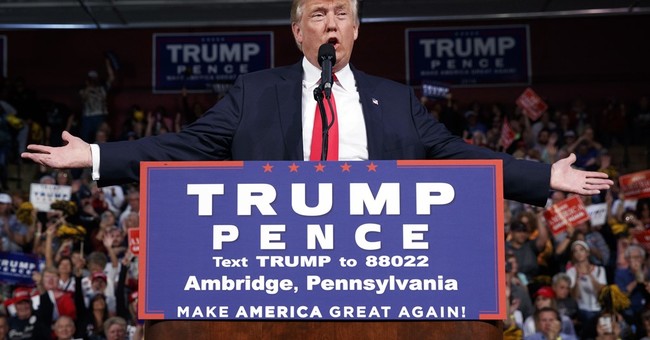 The Trump campaign is in full retreat in Virginia, effectively ceding the state’s 13 electoral votes to Hillary Clinton. Instead, the Trump campaign is redeploying resources to shore up Pennsylvania, Florida, North Carolina, and Ohio (via NBC News):

The decision came from Trump's headquarters in New York and was announced on a conference call late Wednesday that left some Republican Party operatives in the state blindsided. Two staffers directly involved in the GOP's efforts in Virginia confirmed the decision.

The move to pull out of Virginia shows Trump is "running essentially a four state campaign," with the focus now shifting to battlegrounds critical to his chances in November: Pennsylvania, Florida, North Carolina, and Ohio, a source with knowledge of the decision told NBC News.

The Wall Street Journal also reported on the withdrawal, quoting former Virginia campaign chair Corey Stewart, who was fired from the campaign after staging a protest, calling the Republican National Committee “establishment pukes.”

The RNC has not been very friendly and has been pulling resources out,” said Mr. Stewart. “They’ve been starving the Virginia Trump campaign even though it’s necessary to win the country. If we lose this state, it’s because of the RNC reneging on their promises to adequately fund the state’s ad program and ground operation.”

The RNC did not respond to a request for comment about the Virginia campaign.

Stewart’s dismissal and “pukes” comment came after the 2005 Access Hollywood video leaked last weekend, showing Trump making off-color remarks about women, specifically a graphic remark about grabbing their genitals, which sent the party into crisis mode. Some politicians yanked their support of Trump, with other suggesting he step down, though some have clarified their remarks and got back onboard the Trump train after his strong performance at the second debate. Make no mistake; it’s been a very bad couple of days for Trump. At the time these hot mic recordings were released, his running mate, Gov. Mike Pence, reportedly told Trump he was on his own for the next 48 hours. There was also rumblings that the RNC might divert funds away from Trump to down-ballot races, which was negated when Priebus affirmed on Monday that the party stands behind Trump.

Regardless, Katie wrote about the new Fox News poll showing a very doom and gloom picture as of now. Clinton leads by seven points over Trump, with his approval down among Republicans by 11 points. The poll also found that Clinton leads suburbanite women by 24 points. That pretty much rules out Pennsylvania. Daron Shaw, who heads one of the polling firms that conducted this poll, noted on O’Reilly Factor last night that a collapse of that magnitude with swing voter demographics puts Trump out of the running to win places, like Bucks County, PA, or other collar counties around Philadelphia, that’s full of moderate, swing voters that decide the outcome of elections.

At the same time, not so sure that Virginia was winnable this cycle. In August, Guy mentioned that the state was lost—and that Trump should camp out in Florida and Pennsylvania. Now, Pennsylvania looks like it’ll do what it usually does with any Republican running for the White House: disappoint.