Did Homicides Rise In New York? Yes And No 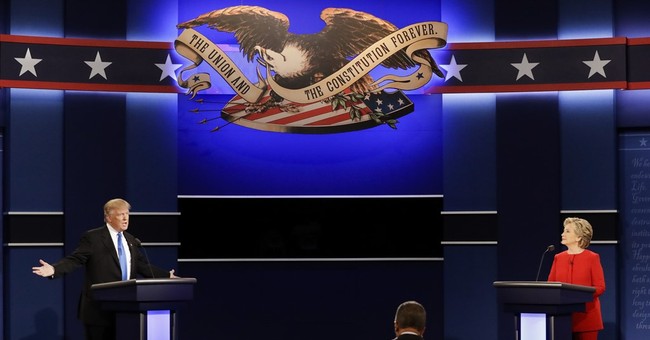 #CNNRealityCheck: Trump said ”murders are up" in NYC. FALSE. They're down 4.3% from this time last year, per NYPD https://t.co/Kya0CdnMMu

Clinton is wrong about murders in NYC dropping. She probably didn't see the FBI's crime report that was released today.

It’s the battle of the fact checkers. Who is right about crime in New York City? It became a point of contention between Donald Trump and Hillary Clinton last night concerning the constitutionality of stop and frisk, which the Republican nominee said had an impact in reducing crime in the city when things were out of control for about a quarter century, most notably the insane amount of homicides that occurred in the early 1990s. Clinton responded by saying that stop and frisk is no more in the city under Bill de Blasio and that crime, including murders, have continued to drop. Trump interjected by simply saying “wrong,” but who’s right?

DONALD TRUMP: …In New York City, stop and risk, we had 2,200 murders and stop and frisk brought it down to 500 murders. Five hundred murders is a lot of murders. Hard to believe 500 is like supposed to be good? But we went from 2,200 to 500 and it was continued on by Mayor Bloomberg. And it was terminated by our current mayor. But stop and frisk had a tremendous impact on the safety of New York City, tremendous beyond belief, so when you say it has no impact, it really did. It had a very big impact.

HILLARY CLINTON: Well, it's also fair to say, if we’re going to talk about mayors that under the current mayor crime has continued to drop, including murders. So there is-

HILLARY CLINTON: No, I'm not.

DONALD TRUMP: Murders, murders are up.

The FBI's annual Uniform Crime Report, published hours before the debate, also showed a nationwide increase in murders for 2015. Perhaps Trump pored over the FBI report during debate prep or maybe he really does feel unsafe in the caverns of the Upper East Side. At the very least, as a salesman whose businesses rely on revenue from tourists, Trump should be a bit more measured discussing crime in New York, portray the nuance in the numbers and show some pride in his birthplace.

We rate this claim to be true, but misleading, because Trump seemingly only cited one data set and failed to acknowledge the NYPD's statistics, which indicate a downward trend.

In truth, this is actually a mixed bag. If you look at the 2015 numbers, homicides, rape and robbery did spike (via WSJ):

…while crime in the city continued its historic downward trend, led largely by a drop in burglaries and stolen vehicles, three of the most serious crimes rose in 2015: homicides were up 5.1%, rapes 6.3% and robberies 2.1%. Also, crime increased in two of the city’s five boroughs: Manhattan and the Bronx.

Politico had a post about the 2015 and 2016 homicide numbers so far, showing just 252 murders through September 25,

The comparison, which covered more than 1,100 city parks, showed cases of rape increased 40 percent, felony assaults jumped 34 percent and robberies spiked 15 percent. Murders were up 200 percent, from two to six. In total, 417 people reported being the victims of violent crimes compared to 340 in the prior nine months.

So, maybe Trump should’ve cited the NYPD data, or maybe he should stay focused on his national narrative, which is that violent crime, including homicides, has risen, which was confirmed by the FBI last night (via WaPo):

Homicides in the United States went up by more than 10 percent in 2015 over the year before, while violent crime increased by nearly 4 percent in the same period, according to new statistics released Monday by the FBI.

All told, the country reported its highest estimated violent crime rate in three years, and while these numbers are far below those seen one or two decades earlier, they mark a sharp increase following two years of declines, the FBI’s summary of crime figures showed.

The long-awaited FBI report was released amid heightened scrutiny of violent crime in the United States, propelled by an increase in homicides in a number of major cities and repeated comments from Republican presidential candidate Donald Trump.

“The report shows that there was an overall increase in violent crime last year, making clear what each of us already knows: that we still have so much work to do,” Attorney General Loretta E. Lynch said Monday in Little Rock. “Violent crime endangers lives, destroys families and paralyzes neighborhoods … In some ways, violence affects all of us — and so all of us have a responsibility to end it.”

Now, Trump was specifically talking about New York—so he had little wiggle room to expound on the national implications of the FBI report, which would’ve vindicated his narrative about crime in the country. Are homicides down in New York? It appears to be on the downward trend; though it’s possible Trump was citing the 2015 numbers. There are many areas to find spike in crime in the Big Apple. The truth is this trip up will be forgotten as Benghazi, the Clinton Foundation, and Clinton’s email fiasco will probably dominate the discussion—and Trump should double his efforts next debate to bring up those three points, especially on the emails. Clinton’s feeble response to that were only a few sentences. Follow up on that. In the meantime, Trump should keep in mind the NYC data, thank our brave police officers to keeping law and order, and then pivot to the national picture, where homicides did rise 10 percent last year.