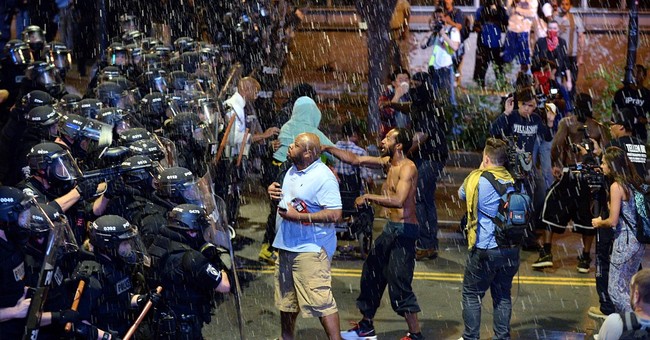 The protests over the shooting death of 43-year-old Keith Lamont Scott on Tuesday sparked another round of protests last night that devolved into chaos. One person was shot in the head by another civilian and is currently on life support. Looting and assaults spread throughout the city. Traffic was being stopped. The disorder grew to such a degree that Gov. Pat McCrory ordered the National Guard and elements of the State Highway Patrol to restore order. Charlotte Police Chief Kerr Putney said that 44 people were arrested last night. There was a discussion about a curfew (via ABC News):

Charlotte descends into chaos in second night of protests over the police-involved shooting of Keith Lamont Scott. https://t.co/WUu0XcATlL pic.twitter.com/UJu61M9YzC

“We certainly are going to talk about that today. We did sign a statement last night to declare a state of emergency, which gives us that authority,” Roberts said in an interview today on ABC News’ “Good Morning America.”

“I will be consulting with our city manager and our police chief and other leaders in our response team to see if that might be a good idea for tonight.”

Charlotte police chief says no curfew to go into effect at this time. "We don't see the need to shut the city down." https://t.co/AAjoL8Ras8

At a press conference this morning, Chief Putney said that there was no need for a curfew. He also said that the video of Scott being shot by police doesn’t definitively show him pointing a gun at police. Scott’s family insists he was holding a book when police approached him on Tuesday, mistaking him for another suspect who they were looking to arrest for an outstanding warrant. That’s when they saw Scott inside his car. According to police, he got out of his car with a gun in his hand and was shot after ignoring warnings from police. Chief Putney said that the video would be shown to the family of Scott first before it’s released to the public.

The night was also marked by a series of assaults. Videos posted to Twitter shows protesters beating two men, both white, in a parking lot and on the street. The victim on the street appears to be homeless. CNN’s Ed Lavendera was pushed to the ground, while a local news outlet reportedly had their still photographer almost tossed into a fire by protestors.

The person who was shot last night has also been identified as Justin Carr.

#BREAKING: We just got this photo of Justin Carr, man who was shot during protests in uptown. CMPD chief says he's in critical condition. pic.twitter.com/9hRmjr6JQL