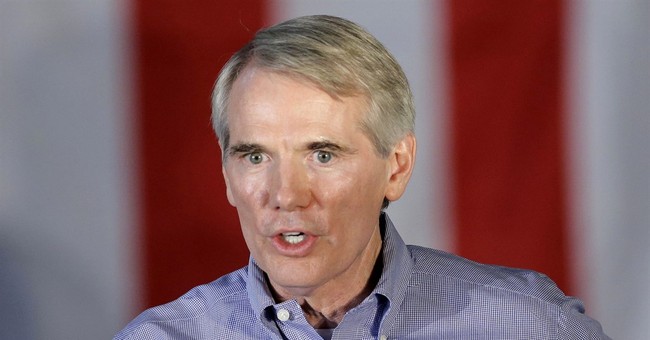 Ohio Republican Sen. Rob Portman's chances of re-election seem to be all but guaranteed as his lead over Democratic challenger former Governor Ted Strickland has broken way into the double-digits. Trump has also surged in the Buckeye State, with Guy offering his analysis on that earlier this morning.

A new CNN/ORC poll had Portman leading Strickland with likely and registered Ohio voters 58/37 and 56/38 respectively. It’s a 20-point blowout at this point, which is why the Democratic Senatorial Campaign Committee has put a hold on television ads for the failing Democrat. A Selzer & Co. poll sponsored by Bloomberg also delivered bad news for Team Strickland. J. Ann Selzer is considered to be one of the nation’s top pollsters, though she was humbled with the results of the Iowa Caucuses. Nevertheless, she added that Ohio’s electorate seems to be more reflective of what we saw in 2004; a good sign for Republicans (via Cleveland.com):

"Our party breakdown differs from other polls, but resembles what happened in Ohio in 2004," J. Ann Selzer, whose Iowa-based firm oversaw the survey, said in a statement. "It is very difficult to say today who will and who will not show up to vote on Election Day. Our poll suggests more Republicans than Democrats would do that in an Ohio election held today, as they did in 2004 when George W. Bush carried the state by a narrow margin. In 2012, more Democrats showed up."

The findings are notable in two ways. First, Trump's 5-point lead in Ohio is his largest of the year, and caps a series of recent polls that have trended away from Clinton, who consistently has held a narrow lead over Trump in polls performed here. Trump is likely at least in part the beneficiary of a traditional tightening of the race that occurs after Labor Day, when voters generally begin to pay closer attention to the election.

And second, the poll suggests that barring the unexpected, Portman is on his way to a safe re-election. It's the second consecutive Ohio poll that found Portman holding a double-digit lead over Strickland. For comparison, polls at this stage of the race in 2012 showed Democratic Sen. Sherrod Brown, leading his Republican challenger, State Treasurer Josh Mandel, by an average of 6 percentage points. Brown eventually won by 5 points.

The 17-point margin is particularly striking given that political observers initially had viewed the Ohio U.S. Senate race as one of the most competitive in the country.

One area that seems to be hamstringing Strickland; the women don’t seem to be going for him. Portman and Strickland are pulling the same amount of support with female voters in the state, with Portman winning in the margins with his lead with men. It’s similar to the demographics breakdown during the 2014 Kentucky Senate race between Republican Senator Mitch McConnell and Alison Lundergan Grimes. Both polled evenly with women, but McConnell’s 10+-point lead with men in the Bluegrass State kept him ahead. In the end, Grimes was slaughtered. Here’s the Quinnipiac poll result on the gender breakdown of the Ohio race (via Cincinnati/USA Today):

In the Quinnipiac University poll, 51 percent of respondents said they support Portman, compared to 40 percent who back Strickland.

“Former Gov. Ted Strickland is facing a blowout at the hands of Sen. Rob Portman,” Quinnipiac said in its news release on the results.

One key problem for Strickland: He's not benefiting from the typical “gender gap,” in which women voters tilt toward Democratic candidates. Instead, the poll shows 46 percent of women back Portman compared to 45 percent for Strickland. Male voters support Portman over Strickland by a wide margin — 57 percent to 33 percent.

Quinnipiac surveyed 775 likely voters in Ohio, and the results have a margin of error of +/- 3.5 percentage points.

Yet, the new CNN/ORC poll has Portman winning women handily, with a 51/39 split among likely voters. On top of that, Portman seems to be winning pretty much everywhere in the state.

So, it should come to no surprise that Republican hopes of retaining the Senate have increased, and Democrats appear to be a bit worried that they’re not going to be able to seal the deal.

The Senate races were going to be tough given the small amount of pickups the Democrats would need to retake the chamber. On top of the Trump factor (he was an unfocused post-Cleveland), Republicans were defending senate seats in states that won Obama twice. These were the best areas for Democrats to chip into their majority. It was going to be a tough year, though I originally thought that Trump would be the albatross that weighed us down. It looks like that’s no longer the case.