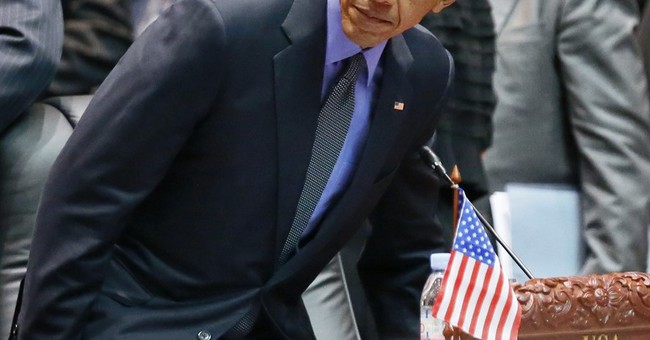 A bill that would allow the families of the victims of the 9/11 attacks to bring lawsuits against the Kingdom of Saudi Arabia is expected to pass the House overwhelmingly today (UPDATE: It just passed around noon). The White House has voiced their concerns over the bill concerning the impact it will have on Saudi-U.S. relations, which has been strained since the Obama White House decided to strike an irresponsible nuclear deal with Iran; Saudi Arabia was against the agreement. The Senate passed the same legislation unanimously in May. As reported by Jordan Fabian and Katie Bo Williams in The Hill, the White House is in something of a pickle.

They wrote that they’ve come short of issuing a full-blown veto threat, though if that does occur, it could come on the day of the 9/11 anniversary. The votes seem to be there to override the veto, the Saudi government said that this bill becoming law would further degrade relations:

Obama has fiercely opposed the bill, arguing it could both strain relations with Saudi Arabia, and also lead to retaliatory legislation overseas against U.S. citizens. The Saudi government has led a quiet campaign in Washington to kill the legislation.

Those efforts have been fruitless in Congress, however.

The legislation has broad support from both parties, and Congress could override an Obama veto for the first time if he rejects the legislation.

Democrats note that the White House has chosen its words carefully when discussing how it will handle the bill.

“I don't take the administration's stated objections as a presidential veto threat,” said Democratic lobbyist Jack Quinn, who is working with 9/11 victims families backing the bill. “There is thus ample room here for the president to sign JASTA or let it become law without his signature.”

For months, the White House has lobbied against the measure and strongly hinted that Obama will nix it. But officials have stopped short of issuing a full veto threat.

“We have serious concerns with the bill as written,” a White House official said Wednesday,

They also noted that never has the president been more alone in a policy fight, while adding that the president needs to consider the other three items on his wish list before he exits government housing in January: criminal justice reform, passing the Trans-Pacific Partnership, and confirming his Supreme Court nominee Merrick Garland.

I would say that he could cross the last item off the list. The Garland confirmation isn’t going anywhere this session, though TPP and criminal justice reform have chances of passing; that could all be over with if he decides to veto this bill. Maybe what Quinn said is going to happen: that a pocket veto will occur, ten days will pass, and the bill will become law without having Obama sign it.

Last Note: Looking back, Reuters, CNN, The Washington Post, and even The Hill reported that the Obama White House issued a veto threat over this bill when it was going through the Senate. Now that the bill has been passed, all eyes are now on the president. Will he veto, picking a fight with 9/11 victims’ families, or will he take some incoherent position on this like with his Syrian policy?