Trump: It's Possible That Some Illegal Immigrants Could Stay, But Let's Secure The Border First 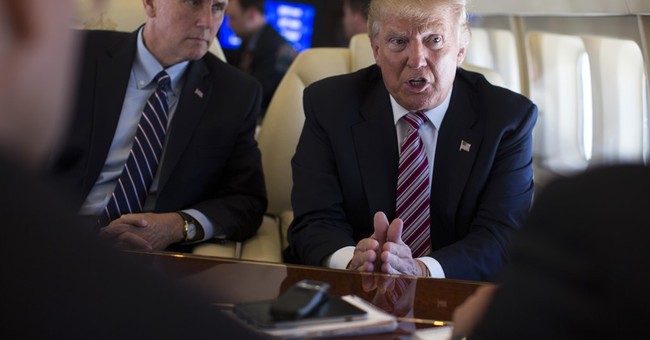 We go back from mass deportations to maybe letting some illegal immigrants stay. It’s impossible to pinpoint Donald Trump on immigration, a trait on a whole host of issues that has served as a double-edged sword for the Republican nominee. His opponents have trouble pinning him down, with attacks on his inconsistency on the issues mostly being shrugged off by most Republican voters. At the same time, it’s hurting him in his efforts to fully consolidate the base.

Prior to his immigration speech on September 1, there was a lot of talk about Trump doing what many thought he would on immigration: moderate—especially on the whole deportation force. Well, at the time, that turned out to be false when he said this in Phoenix last Wednesday [emphasis mine]:

We’re going to triple the number of ICE deportation officers.

Within ICE I am going to create a new special deportation task force focused on identifying and quickly removing the most dangerous criminal illegal immigrants in America who have evaded justice just like Hillary Clinton has evaded justice, O.K.?

I will get this done for you and for your family. We’ll do it right. You’ll be proud of our country again. We’ll do it right. We will accomplish all of the steps outlined above. And, when we do, peace and law and justice and prosperity will prevail. Crime will go down. Border crossings will plummet. Gangs will disappear.

And the gangs are all over the place. And welfare use will decrease. We will have a peace dividend to spend on rebuilding America, beginning with our American inner cities. We’re going to rebuild them, for once and for all.

For those here illegally today, who are seeking legal status, they will have one route and one route only. To return home and apply for reentry like everybody else, under the rules of the new legal immigration system that I have outlined above. Those who have left to seek entry —

The deportation force appears to have been remolded into a more mainstream position (who isn’t for booting criminal aliens?), though some noted that Trump’s plan was indeed one that included mass deportations. At the same time, implementation of E-verify, a biometric entry-exit visa tracking system, allowing immigration enforcement agencies to do their job, boosting the number of border patrol agents (though the Gang Of Eight bill actually would’ve added more), and, again, deporting criminal aliens aren’t controversial positions. In fact, Democrats have advocated for some of them. They’re just rehashed federal proposals that have been collecting dust for decades. But the last part does seem like Trump is supporting a form of self-deportation, which he criticized Romney for promoting in 2012. Now, ABC News' David Muir said that Trump was open to the possibility that some illegal immigrants could stay, but he wants to secure the border first before a decision on that is rendered:

In an interview with ABC News' David Muir, Donald Trump refused to say if undocumented immigrants who don’t necessarily want to become citizens would have to leave the country, admitting the possibility that they could stay.

Muir followed up, asking about undocumented immigrants who did not want to become citizens of the U.S.

"They have to make a determination what happens when the border is secure," Trump said.

"So you’re open to them staying here undocumented?" Muir asked.

A few days after Trump's Phoenix address, Rudy Giuliani, a die-hard Trump supporter, said that the billionaire no longer supported mass deportations. Could this be due to another intervention by Chris Christie? Trump is probably going to offer another position, or clarify it, but it really doesn’t matter at this point. His supporters aren’t going to shun him, unless he does announce that he’s going to offer amnesty, which isn’t going to happen. Voters are now starting to settle on their choices for president, though they may not be happy with those choices. As with anything with Trump, it’s a gamble. But with Clinton, you know exactly what you’re getting—and it’s not border security.