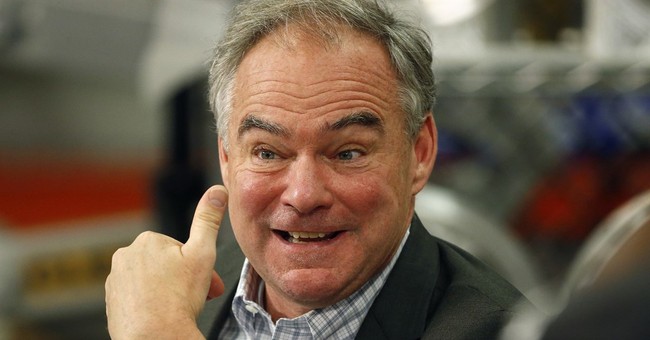 CNN’s John King and his panel couldn’t control their laughter over Democratic vice presidential candidate Sen. Tim Kaine’s (D-VA) answer over Hillary’s refusal to hold a press conference. We’re approaching the 300-day mark. Kaine tried to diffuse the controversy this week, saying he doesn’t see the difference between holding a press conference and talking to the press, where he said that he’s witnessed Clinton doing much of the latter.

“Uh-huh,” replied King, with his panel chuckling quite loudly because it’s not true. This is a campaign that ropes in press like cattle, that offers chocolate to shut them up, or straight up ignores them on the trail. A Clinton aide hopes that the press corps traveling with the former first lady on her private plane this week will finally shut them the hell up, indicative of the campaign's feeling towards the press.

Yet, King’s colleague at CNN, Sara Murray, did note that Republican nominee Donald Trump isn’t good with the press either, leaving the press crops behind when he went to Mexico, refusing to take questions on the rope lines, and has blacklisted some news organization from covering his events.

True—but Trump has held at least 14 press conferences. They’re intense, with Trump even calling some reporters “sleaze,” but he talks to them. A testy exchange is better than nothing at all. It's certainly more than what Clinton is doing at present.

Politico’s Anne Karni found these reports from the traveling press poll on the eve of them being granted access on  Clinton's “Stronger Together” 737:

Drowned Out By a Jet Engine, Aug. 31: Clinton’s plane landed in Cincinnati, from East Hampton, New York, ahead of her speech to the American Legion. On the tarmac, Clinton was greeted by a group of county Democratic Party chairs. But, “your pooler was not close enough to hear any conversations over the noise of the plane.”

They Paved Paradise and Put up a Parking Lot, Aug. 30: Clinton hit up three big fundraisers in the Hamptons. While she raked in the cash, the pool didn’t have much to report on. “Pool was unable to hear a word of HRC's remarks at first cocktail party. She also took questions, which pool was also prohibited from hearing.”

At an evening fundraiser hosted by Jimmy Buffett, Clinton was inside dancing with Paul McCartney, according to attendees. Pool reporters were stationed about 400 yards away from the house, “among the parked cars.”

Basement Blues, Aug. 29: While Clinton entertained donors who coughed up $33,400 a head to attend a Hamptons fundraiser at the home of Jay Snyder, there was “no chance of your pool hearing Clinton here. We are being held in a quaint, but lovely guest house, while Clinton is in the main house.” Earlier in the day, there was a brief window at a fundraiser when the pool could hear Clinton’s remarks. That was quickly remedied. “Staff shooed us into a hidden room farther in the basement out of earshot.”

Chocolates > Questions, Aug. 25: Clinton popped into Hub Coffee Roasters after a rally in Reno, Nevada. There, she ignored questions about Donald Trump lobbed at her from the reporters in the coffee shop. Instead, she encouraged them to sample Dorinda’s Chocolates. “It’s really good!” she said.

We Can Hear Her! Aug. 21: Clinton attended a fundraiser headlined by Cher in Provincetown, Massachusetts. The pooler was able to catch snippets of Clinton’s remarks, which touched on issues like infrastructure, health care, mental health and the fact that she plans to include LGBT people in her administration. “Friends don’t let friends vote for Trump,” Clinton told the audience.

Martha’s Vineyard, Aug. 20: At a fundraiser on the island, attended by both Clintons, pool didn’t have as much luck as in Provincetown. “At one point we could hear HRC’s voice followed by large cheers, but nothing more.”

Stranded in New York, Aug. 19: Straight from the pool report: “Clinton went out to Martha’s Vineyard a day early, without the pool. Although we had a pooler on standby in New York, the campaign told us about this development only after the fact.”

Yeah, Kaine is playing his role as a running mate well, though he’s using soggy powder to fight against the various narratives against Clinton.