The Clinton Campaign To Press: You're Joining Us Next Week So Shut The Hell Up 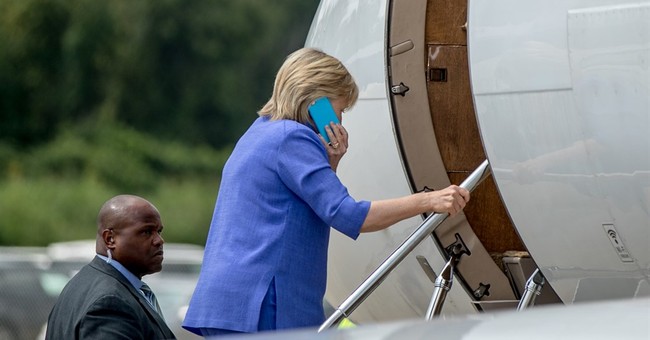 Politico’s Glenn Thrush had an interesting tweet this morning from the Clinton camp about the press corps traveling on Clinton's private plane next week. A Clinton aide reportedly said they're hoping that the media will shut the hell up about the former secretary of state's lack of media access due to this development.

CBS News’ Nancy Cordes noted the difference between Trump and Clinton. Trump has held at least 14 press conferences this year, while Clinton has yet to hold one. For the past couple of weeks, she’s been too busy fundraising in Nantucket, Martha’s Vineyard, Cape Cod, and California to talk with the press, though she did collect some $31 million for her campaign and the Democratic Party, according to Cordes.

Fun facts about Hillary's press plane '08: 1) she loved starting gaggles DURING landings 2) She wanted OTRs but Times/Newsday (me) objected

Hillary aide on press joining her on plane next week: "I hope this will shut you the hell up"

It’s become another line of attack by Trump. For the campaign to reportedly get testy over the press, and their questions relating to the emails and the Clinton Foundation, is bush league. She’s a presidential candidate. She’s supposed to be bombarded with questions. She’s supposed to have her life put under the microscope. It’s not the media’s fault that the Democratic nominee is plagued with issues of trust, honesty, and ethically questionable dealings with her nonprofit. It’s certainly not the press’s fault that she’s been caught time and again lying about the nature of her private email system, deleting emails relating to Benghazi that we just learned about, and one dealing with the technical problems of her home server that showed this system was set up to avoid her personal information being accessible, not due to convenience.

Her last press conference was on December 4, 2015. It’s been over 269 days since she’d held a press conference. That’s outrageous—and again, not the fault of the press corps. At the 262-day mark, Katie noted that Clinton doesn’t want to have a press conference, where she could once again trip over the mangled mess of lies that she and her minions have dished out about her emails. With the Foundation, you’re going to have a rehash of her prevarications and lies for the email server, along with answering to allegations that her nonprofit is a pay-to-play institution for the powerful and well connected. That’s not a fun game; then again maybe she should’ve expected this being a presidential contender. The deny game is their default position, but it’s killed her in the polls.

On the flip side, Trump is combative, but at least he talks to the press. Clinton tries to shut them up with chocolate. Cordes noted that Democrats note Trump’s refusal to release tax returns. Fine—but Clinton tried to hide an additional 30 emails about Benghazi. One deals with a serious terrorist attack and national security. This is an apple to oranges comparison.

If the Clinton camp is frustrated with the press, they just need to look at the person they’re working for. For Clintonites, they’re mad at the press for reporting on their boss’s bad behavior, her lies, her deceit, and evasion of answering questions. The latter is the worst part. Of course, the press will continue to ask questions germane to the ethical issues surrounding the former first lady if it looks like she’s stonewalling, which she admittedly is doing because she knows she’s in a mess over her emails and Foundation. That’s all on her. So, frankly, concerning the Clinton camp being mad at the press: they can shut the hell up too.