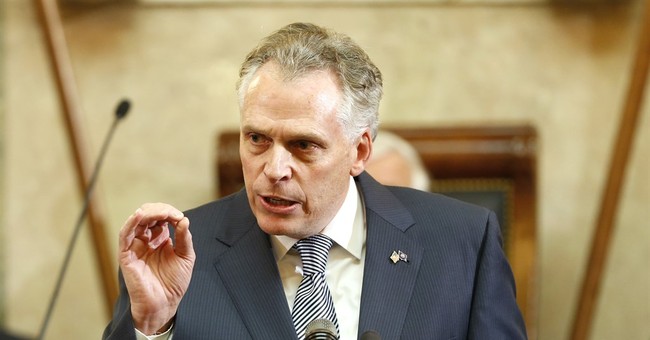 Virginia Democratic Gov. Terry McAuliffe, through the power of the autopen, plans on restoring the voting rights of convicted felons. The first batch of 13,000 are already set, with a total of 200,000 convicts being granted individual pardons to ensure they can participate in the voting process. While McAuliffe makes sure these newly enfranchised felons, who are most likely to register as Democrats, boost the voter rolls, the state faces a $1.5 billion shortfall (via Richmond Times Dispatch):

Gov. Terry McAuliffe will announce a shortfall of roughly $1.5 billion in the two-year state budget to the General Assembly money committees on Friday, according to a source familiar with the revised revenue forecast.

The size of the projected shortfall comes almost two weeks after McAuliffe consulted with state political and business leaders in a meeting that one legislator called “cautiously pessimistic” about Virginia’s economy, especially with the possibility of potential cuts in federal spending under budget sequestration in the budget’s second year.

McAuliffe had planned on issuing a blanket pardon to those 200,000 felons, but was stopped by the state Supreme Court after the Virginia GOP, claiming he overreached, filed a lawsuit. The court agreed, so McAuliffe circumvented it with these individual pardons. Well, nothing we can do about that now, but I would hope Terry does something sensible about the budget shortfall. I’m not betting the mortgage on it.