Trump Campaign: On Second Thought, There Isn't Going To Be a Major Speech On Immigration This Week 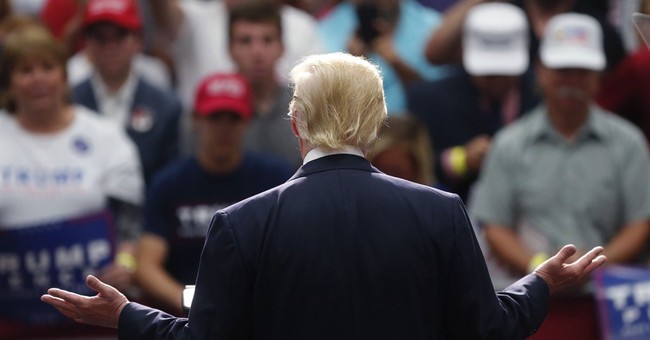 Donald Trump isn’t flip-flopping on immigration, though he’s not spelled out what he plans to do with the estimated 11 million illegal immigrants living inside the United States. Trump wants to build a wall, and has positioned himself to be the nation’s sheriff when it comes to enforcing our immigration laws. Yet, a meeting with Hispanic leaders on Saturday, in which some said that the Republican nominee might be open to legalization, got the gears of the rumor mill going. An announcement on this possible pivot was expected to be this Thursday; that’s now been nixed (via Denver Post):

Donald Trump is attending a fundraiser in Colorado on Thursday but will not make a speech on immigration, his campaign now says, despite national media reports announcing the event.

Lydia Blaha, a spokeswoman for Trump’s campaign in Colorado, said he will not hold an event in coordination with the fundraising trip, as first reported by Univision and other media outlets. The campaign was exploring a Denver-area location for the event, but later reversed course. The campaign told supporters in an email “the speech (Trump) was planning on giving is still being modified.”

Kellyanne Conway, Trump’s new campaign manager who had drafted a pro-amnesty memo in the past, also couldn’t give a definite answer either in the immigration issue on the Sunday morning talk shows. She gave us a “to be determined” teaser for Trump’s stance on immigration. Conway even mentioned that Sen. Jeff Sessions (R-AL) an immigration hawk and one of Trump’s supporters, isn’t for deporting 11 million people. Now, Trump insists he isn’t flip-flopping, but that he’s working on something that’s fair regarding immigration—whatever that means.

So, the debate continues. Did Trump get cold feet on an immigration announcement to avoid torpedoing his streak of good media days by infuriating the pro-Trump Republican base? Or will this new plan be so tremendously luxurious that it cannot possibly be revealed unless he wins the presidency? Whether Trump is shifting on immigration is still up for debate, but the discussion concerning possibly creating a pathway to legalization for illegal immigrants seems to be raging among the Trump team. We shall see if Trump signs off on making TBA and a formal announcement in the coming days. By the way, do you think this debate about what to do on immigration that’s fair is partially one of the reasons why Trump is canceling some of his campaign events? At the same time, Hillary Clinton hasn’t held a press conference all year.

Again, I say, what a year regarding these two choices for president.