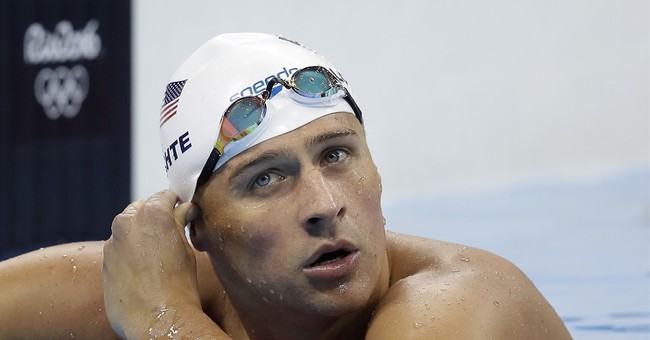 The Olympics are over, but not before ending on a somewhat awkward note for the U.S swim team. We all know the media fiasco Ryan Lochte fell into, where the Olympian alleged that he was robbed by armed guards. Now, the prevailing media narrative is that Lochte and three other swimmers were drunk, vandalized a bathroom, and made up a lie to cover their tracks. Well, here’s the problem. It looks as if Lochte’s recollection of events turned out to be the correct story, according to USA Today Sports. Larry wrote about the whole sordid affair over at Hot Air, where an investigation by the publication found that the bathroom wasn’t vandalized, that there’s closed circuit cameras by the bathroom door, which we never saw (there’s no evidence that they even went near the bathroom); that the names of the security guards aren’t being released, nor are they available to be contacted by the media; and the whole notion that they were indeed robbed during that encounter.

Around the same time, the media coverage on the Obama administration being caught in another linguistic dust up over the word ransom barely made a dent in the evening news broadcasts of the Big Three, CBS, NBC, and ABC­, between August 18 and 19th. Now, if they had actually looked into the oddities of the narrative the Rio police constructed, maybe it would’ve justified some airtime. I’m not so sure about 6-10x more airtime, only to give credence to the statements of a corrupt banana republic (Larry’s description, not mine). Scott Whitlock and Nicholas Fondacaro of Newsbusters crunched the numbers:

ABC, CBS and NBC have already devoted 10 times more coverage to the Olympic swimmer “scandal” than they did the bombshell admission that the Obama administration linked the release of four American prisoners and a $400 million payment to Iran.

Thursday night and Friday morning, the networks pounced on the report that Olympian Ryan Lochte and three other swimmers may have fabricated some or all of an alleged robbery in Rio de Janeiro. This garnered a whopping 37 minutes and 31 seconds. In comparison, the cash payout to Iran, which looks suspiciously like ransom, only amounted to a scant 3 minutes and 46 seconds.

Fondacaro added that ABC News devoted the most to the Lochte robbery during the August 19 broadcasts:

Out of all of the networks, ABC dedicated the most time to the drunken swimmers with five minutes, 56 seconds. They also gave the cash handoff the least amount of time with a mere 25 seconds. “For the first time today, calling the cash, quote, “leverage,” in the prisoner exchange,” reported anchor David Muir in a brief on World News Tonight, “The cash came from Iranian money frozen by U.S. authorities after the Iranian revolution, but the administration still denies that that cash was ransom.”

The broadcaster of the Olympics, NBC, was almost on par with ABC with five minutes, 20 seconds spent on the lies told by Lochte and 28 seconds on the Iran handoff revelations. Anchor Lester Holt seemed on defense during his brief on NBC Nightly News, “But officials insist the United States returning that Iranian money, from a decades-old account, was conducted separately from the negotiations over the detainees and the U.S. did not pay a ransom.”

CBS Evening News actually spent the least amount of time on the swimmers and the most time on the handoff, two minutes, 17 seconds and one minute, eight seconds respectively.

To make the omission more overt, the ratings for the Rio Olympics weren’t spectacular. Nevertheless, the administration was caught in an embarrassing deal, where they pathetically tried to spin the $400 million payment as leverage instead of ransom—even though they stipulated that the Iranians couldn’t take control of the money until the four detained Americans were released (i.e. the plane carrying them was up in the air from Tehran). That, uh, sounds like a ransom payment. Also, yes, the money to settle this arms deal dispute that dates back to the ’79 Revolution was appropriated back in February—we didn’t know that transfer of the money was contingent on the Americans leaving first.

Alas, we shouldn’t be shocked about this administration's liberal use of definitions when it comes to language. After all, they called the Russian invasion of Ukraine an “uncontested arrival.”