Liberal Writer: Hillary Could Sink Her Presidency If She Can't Get A Grip On Her Ethics Issues 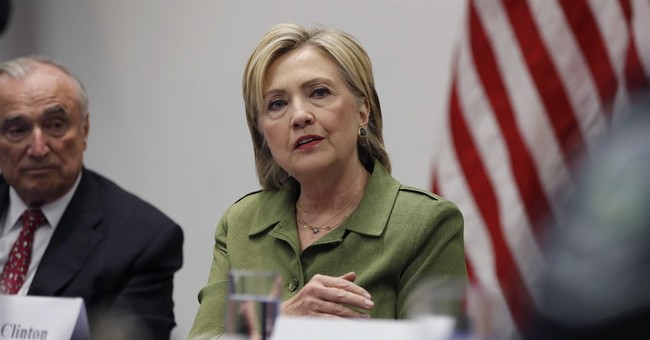 So, in all, the Clintons’ new self-imposed rule on foreign and corporate donations would cut off more than half of the major donors who dole out cash to the Foundation. The power couple vowed to stop accepting money from those entities should she become the next president of the United States, though it was met with skepticism from the Left and Right concerning whether this was a serious declaration—especially since you would think they would want to make this announcement months ago. The Washington Post did the analysis:

More than half of the Clinton Foundation’s major donors would be prevented from contributing to the charity under the self-imposed ban on corporate and foreign donors the foundation said this week it would adopt if Hillary Clinton won the White House, according to a new Washington Post analysis of foundation donations.

The findings underscore the extent to which the Clintons’ sprawling global charity has come to rely on financial support from industries and overseas interests, a point that has drawn criticism from Republicans and some liberals who have said the donations represent conflicts of interest for a potential president.

The analysis, which examined donor lists posted on the foundation’s website, found that 53 percent of the donors who have given $1 million or more to the charity are corporations or foreign citizens, groups or governments. The list includes the governments of Saudi Arabia and Australia, the British bank Barclay’s, and major U.S. companies such as Coca-Cola and ExxonMobil.

The foundation’s announcement drew skepticism Friday from the right and the left as critics wondered why the Clintons have never before cut off corporate and overseas money to their charity — and why they would wait until after the election to do so.

Moreover, can we trust the Clintons? Hillary’s numbers in this field are abysmal, thanks to her email fiasco—but the Clinton Foundation donations have also raised the eyebrows of a substantial proportion of voters:

Nearly half of likely voters, 47 percent, said they were bothered a lot by the foundation’s acceptance of money from foreign countries while Clinton was secretary of state, according to a Bloomberg News poll in June. That’s similar to the 45 percent of voters who were bothered by Trump’s refusal to release his tax returns.

Yet, the donations carry the most weight in terms of intrigue, as good things tend to happen to donors of the Clinton Foundation once that big check is written. In some cases, these interests were paying Bill millions while also having simultaneous matters before Mrs. Clinton’s State Department at the time. The most recent reported in The Wall Street Journal last year, where Bill was paid $1 million by the United Arab Emirates, who were also trying to get a pre-clearance facility built to make traveling to the U.S. easier. In the end, the arrangement was agreed upon. From the energy company Pacific Rubiales with the Colombia Free Trade Agreement to the millions donated to the Foundation from governments that resulted in billions of arm sales in return, somewhere in the timeline of a vested interested involved with this non-profit—they’re rewarded for their participation. It’s a global hub to cash in favors—and it’s operating under the family of the next president. Yeah, there might be a few glaring ethics questions with this arrangement. On top of that, the Foundation also had trouble with their tax returns, and failed to disclose 1,100 foreign donations.

Will these issues sink Clinton in the election? No. If her email fiasco, in which she did receive classified emails through her unsecured, and unapproved, server wasn’t a criminal offense (a double standard that’s for another time), this surely won’t. But some liberals, like Jonathan Chait, noted that it could sink her presidency—and that the power couple isn’t taking these ethics questions as seriously as they should. So, it’s a win the battle, but lose the war (potentially) when it comes to Clinton, her Foundation, and the vested interests that have flooded the institution in cash (via NY Magazine):

“Give a man a reputation as an early riser,” said Mark Twain, “and he can sleep ‘til noon.” Hillary Clinton finds herself in the opposite situation: She has a reputation for venality — the merits of which we can set aside momentarily — that forces her to a higher ethical standard. Her inadequate response to the conflicts of interest inherent in the Clinton Foundation show that she is not meeting that standard, and has not fully grasped the severity of her reputational problem.

The most enduring aftereffect of her extended primary fight with Sanders was to import Republican attacks on her character into liberal messaging. Sanders emphasized real issues like collecting speaking fees from Goldman Sachs rather than fake issues like the murder of Vince Foster, but the impact was the same — it reintroduced Clinton, to a generation that had never voted for her or her husband, as a shadowy, duplicitous insider. Endorsing all sorts of liberal programs Congress will never pass and letting Sanders’s supporters write the party platform hardly solves this problem.

The risk that Clinton’s tainted image will defeat her is small but real enough to merit concern. The much larger risk is that her lax approach to rule-following and ethical conflicts will sink her presidency.

He also added that the Clinton Foundation couldn’t be simply passed off to be managed by a third party since the Clinton name is what draws the money. He suggests that the Foundation should be shut down to avoid these ethical landmines, which is just as likely as Trump dropping out in September and passing the torch to Mike Pence. Chait also touched upon Clinton’s poor performance with young people not being ideologically tied. She’s more to the left of President Obama on some issues, though he gets a higher approval rating than she does. He also said that young people flowed into the Sanders camp due to his authenticity and push for a good government agenda. I think it was because he was promising a lot of free stuff.

Optics matter. Appearances matter. And if Team Clinton thinks that just saying they’re going to prevent some donors from giving to the Foundation is going to build a foundation of trust, I think their projection, like their calculation on the longevity of the email story, is way off.