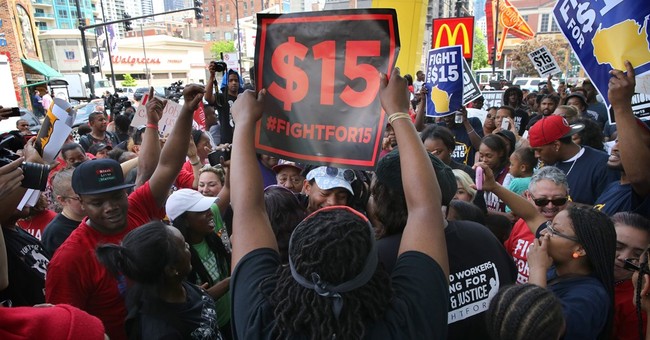 Minimum wage politics is popular. It’s popular with almost every major voting demographic in the country. Even white working class males like minimum wage increases, which is why Democrats play it up where they can. What they don’t tell you is the predictable outcome of these proposals, which is fewer hours, less work, and jobs lost. In 2013, 700,000 jobs were lost due to minimum wage increases. In Seattle, where a $15/hour minimum wage will be phased in by 2018, hours were cut and fewer people worked—and the rate is only at $11. In New York, a $15/hour minimum wage is now law. They should expect similar results.

Now, there’s a new study from Heritage that shows the politics of minimum wage increases is bound to cannibalize millions of jobs. Nine million to be exact, with 400,000 hitting New York:

Mandatory $15-per-hour starting wages was once a fringe idea. Politicians of every ideological stripe agreed that it would eliminate too many job opportunities. Nonetheless, recent, union-backed campaigns have pushed the idea into the mainstream. The California and New York legislatures recently passed bills raising minimum starting wages in their states to this level.[1] Several cities, including Washington, DC, have also passed $15-per-hour minimum wages.

In Congress, Senator Bernie Sanders (I–VT) has introduced the Pay Workers a Living Wage Act, which would raise the federal minimum wage from $7.25 per hour to $15.00 per hour over four years.[2] Prominent Senators, including Assistant Minority Leader Dick Durbin (D–IL), have co-sponsored this bill. The Democratic Party has formally included a $15-per-hour minimum starting wage in its 2016 campaign platform.[3] If the policy became law in 2017, the federal minimum wage would rise to $15 by 2021.

Table 1 uses this employment response to estimate the impact of a $15-per-hour state minimum wage in each state.[9] The table shows the total proportion of employees directly affected by minimum starting wages of $15 per hour in 2021 in each state.[10] It also shows the total number of full-time-equivalent (FTE) jobs such a mandate would cost each state, relative to the employment that would have occurred if each state left its minimum wage at 2015 levels.[11]

Nationwide, such state minimum-wage hikes would result in the loss of approximately 9 million jobs. The table shows that New York’s $15-per-hour starting wage requirement, if it takes full effect, will cost the Empire State over 400,000 FTE jobs. In Illinois, $15-per-hour starting wages would eliminate more than 300,000 jobs. Arizona and Indiana would both lose approximately 200,000 jobs.