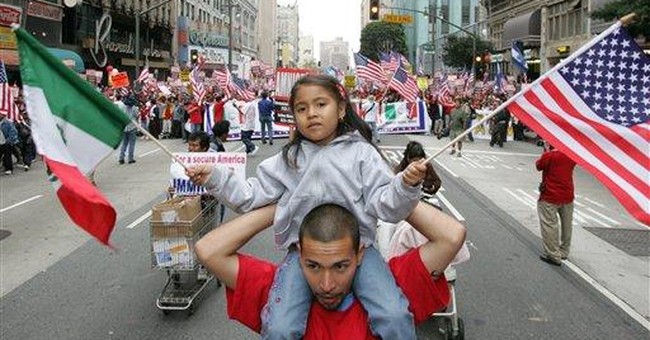 It’s no secret that Democrats really want to dominate with the Hispanic demographic. It contributed to their victory over Mitt Romney in 2012, and with Trump proudly declaring he’ll build a wall to keep out illegal immigrants—they view winning these folks again to be a cakewalk. There’s also a bit of trolling going on, especially since Hillary Clinton tapped an illegal alien to assist in Hispanic voter outreach. She’s also reaching out to “Dreamers,” children brought over into the United States illegally, along with their parents (via Associated Press):

The 730,000 young people brought to the U.S. as children without legal status are prohibited from voting. Known as Dreamers, they've proven themselves to be a powerful organizing force in American politics, mounting a high-profile public campaign that pressured President Barack Obama to grant many of them and their parents reprieves from deportation though two executive orders.

Clinton's national voter registration program, called "Mi Sueño, Tu Voto/My Dream, Your Vote," is being launched on the four-year anniversary of the 2012 order that temporarily shielded from deportation some young immigrants brought to the country illegally as children and allowed them to work legally.

Organizers will remind voters that a Trump presidency would end that program, according to the campaign, which is already at risk after a June Supreme Court effectively killed Obama's efforts to give legal status to some of the 11 million immigrants living in the U.S. illegally.

The program is part of an aggressive effort by Clinton's campaign to woo the record 27.3 million Latinos eligible to vote in 2016. Polling shows Trump doing worse with Latino voters than any GOP presidential candidate since 1996. Much of the new effort will focus on battleground states including Colorado, Nevada, North Carolina and Florida, where Latinos and other immigrants make up an important part of the voting base.

Over at the Washington Free Beacon, Joe Schoffstall reported how the former first lady has selected Astrid Silva, an illegal immigrant, to help out in these efforts. Silva, who spoke at the Democratic Convention, is an organizing director with the Progressives Leadership Alliance of Nevada. That organization is already waging a registration campaign to add 400,000 new Hispanics to the rolls for the upcoming election. It’s part of the Families Fight Back campaign that Schoffstall noted is bankrolled by left wing billionaire George Soros:

Silva said in the press release that while young illegal immigrants may not have the right to vote, the new effort will “help ensure that our stories are heard and it will send a clear signal to Donald Trump that we cannot be silenced.”

The Families Fight Back campaign was announced in March by activist leaders from Nevada, Colorado, and Florida, and the immigration groups Center for Community Change, Latino Victory Project, and America’s Voice.

“We are very aware that every day that our families are on the verge of being separated is a day that we have to fight for them,” Silva said at its launch. “We need people to register, to vote, to become citizens. We want to make sure that the community understands their power, has access to the tools they need, and know that their responsibility to our country needs to be met.”

The Immigrant Voters Win PAC was then established to fund the Families Fight Back campaign. Soros and other liberal donors vowed to spend $15 million on the effort.

Silva did not return a request for comment by press time.