So, The Olympic Diving and Water Polo Pools Turned Green 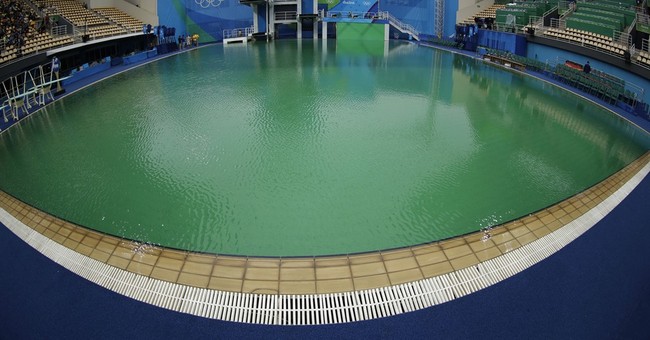 Well, Rio problems seem to be mounting as we’ve entered the first week of the Summer Olympic Games. The diving and water polo pools have turned green, with officials saying that too many people being in the pool threw off the chemical imbalance. Yeah, I’m sure that’s the problem, guys (via NYT):

The problem of the suddenly green water in the Olympic diving pool worsened Wednesday as whatever was ailing the pool migrated (albeit in a lighter shade of green) to the nearby pool used for water polo and synchronized swimming. But Olympic officials said that after extensive tests, they had finally pinpointed the reason: a chemical imbalance caused by too many people using the water.

There had been speculation Tuesday that algae was the cause, but that theory was dismissed by officials.

“Midafternoon, there was a sudden decrease in the alkalinity in the diving pool, and that’s the main reason the color changed,” Mario Andrada, a Rio 2016 spokesman, said Wednesday morning.

He noted that a lot of people had been in the pools in the past week at the Maria Lenk Aquatic Center, and that their presence had touched off changes in the water’s chemical balance.

“We probably failed to note that with more athletes, the water could be affected,” Andrada said. He said, too, that the water had not been monitored as carefully as it should have been and that the trouble was apparently exacerbated by Wednesday morning’s rain.

This only adds to the water issues that are ever present at the Olympic Games. The Guanabara Bay, where the water events are being held, is teeming with contaminated water due to the endless dumping of raw sewage, which led health officials to warn those participating to keep their mouth shut to avoid infection. Belgian sailor Evi Van Acker is the first victim of the site’s unsanitary conditions. The indoor pools becoming discolored only add to the narrative that Rio was probably not the best place to host the Olympics. Oh, and the attempts to fix the pools has led to water polo players not being able to see due to an excess of chlorine.