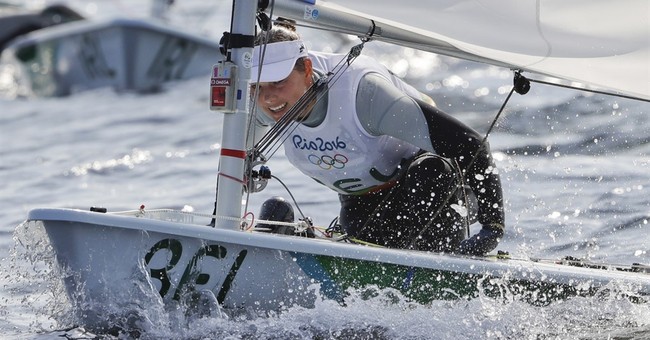 A Belgian sailor is the first victim of the appalling water conditions at the Rio Olympics. Water that’s so atrocious, health officials warned Olympic competitors to keep their mouths shut if they want to avoid ingratiating themselves with the bay’s toxic elements. After an evaluation, medical officials said this was an isolated incident. We shouldn't be shocked if more fall ill throughout the course of the Games however. (via Guardian/AP):

Evi Van Acker reported feeling sick after Wednesday’s races, the governing body World Sailing said. Her poor performances have put her at risk of missing out on a medal.

Her coach told the Belgian VRT network that he believes Van Acker contracted a severe intestinal infection while training in Rio de Janeiro in July.

“Evi caught a bacteria in early July that causes dysentery,” her coach, Wil Van Bladel, said. “Doctors say this can seriously disrupt energy levels for three months. It became clear yesterday that she lacked energy during tough conditions. She could not use full force for a top condition … The likelihood that she caught it here during contact with the water is very big.”

Van Acker was evaluated by the chief medical officer after her races on Wednesday and examined further by the Belgian medical team that night, the World Sailing spokesman Darryl Seibel said. Seibel added that this appears to be an isolated case and Van Acker is the only sailor who has reported feeling ill in the opening days of the regatta.

Prior to the start of the Olympic Games, reports of trash and other obstacles littering Guanabara Bay were documented by teams doing test runs, gauging the wind and tidal currents. It’s also loaded with fecal matter due to the flood of raw sewage, which is a problem Brazilian officials hope to fix through water treatments…by 2035.