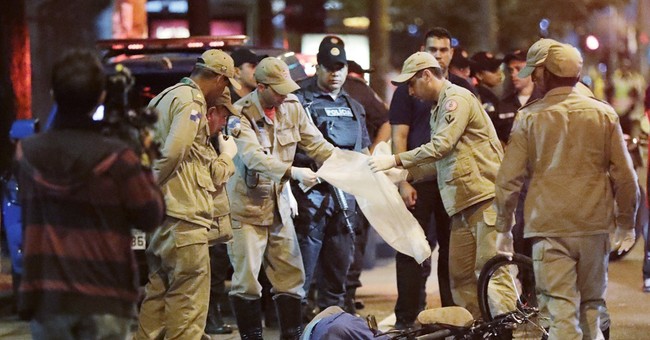 The Summer Olympic Games are off to a rather shaky start. The international event already has two people on the butcher’s bill. Police has to shoot and kill a would-be robber, while another woman fled three muggers, who shot her in the head. Agence France-Presse, who reported on these events, added that 85,000 troops have been deployed to provide security as well:

Rio police said in a statement that a man was mugging people near the Maracana stadium when he was intercepted by one of the police officers sent from another area of Brazil to Rio as part of the huge reinforcements.

"The man was carrying out assaults when a military police officer... shot him," the statement said.

The woman, 51, was attacked by three armed muggers, police said. She tried to flee and was shot in the head.

Yahoo! Sports also noted that a controlled explosion was conducted on a suspicious package near the cycling race’s finishing line. Over at the equestrian venue, located on a military base, the news organization added that a stray bullet ripped through the media center, almost striking a New Zealand team official:

"The security services found a suspicious package close to the cycle road race finish line in Copacabana and as a precaution decided to perform a controlled explosion," Rio Games organisers said.

Worse happened at the equestrian venue at Deodoro, which is on a military base, when a stray bullet ripped through the media centre's canvas roof and landed on the floor.

Indeed. After all, an Australian paralympian was robbed in the city, a New Zealand athlete alleges police kidnapped him, and there was a terror plot broken up prior to the games. Stay safe out there, folks.