What If Trump Drops Out? 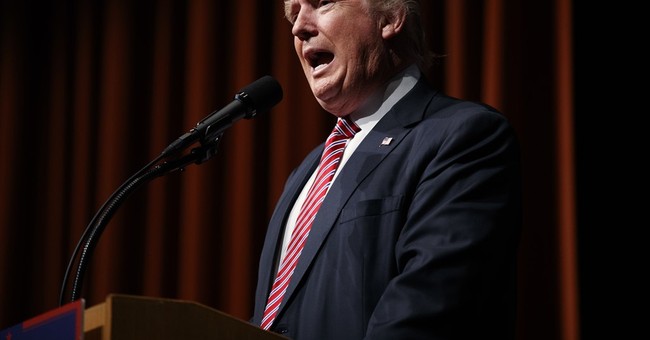 UPDATE: Guy as a more lengthy analysis/post on this here.

It’s time for an intervention. After an utterly disastrous 24-hour news cycle in which the Trump camp seemed unable to defend the indefensible—attacking a Gold Star family, tossing a crying baby from a rally (you kiss them on the trail), and saying how he always wanted to get a Purple Heart—the GOP is plotting an intervention for the billionaire real estate magnate. NBC News is reporting that RNC Chairman Reince Priebus, former NYC Mayor Rudy Giuliani, and former House Speaker Newt Gingrich are going to sit down the Republican nominee for a little chat, namely how to act like the nominee.

These three musketeers are also soliciting the help of Trump’s children to get a grip and start running a campaign that hasn’t become the clown show we’ve seen over the past couple of days. The silver lining: even after all of this, Trump still has a roadmap to the White House, though that could close if he keeps up his erratic behavior on the trail. Of course, the Trump campaign denies such a meeting is in the works (via NBC News):

The group of GOP heavyweights hopes to enlist the help of Trump's children - who comprise much of his innermost circle of influential advisers - to aid in the attempt to rescue his candidacy. Trump's family is considered to have by far the most influence over the candidate's thinking at what could be a make-or-break moment for his campaign.

Trump campaign chairman Paul Manafort said Wednesday he had heard nothing of such a meeting and disputed that it would be at all necessary, saying on FOX News that "the only need we have for an intervention is with some media types who keep saying things that aren't true."

"The candidate's in control of his own campaign," he said.

The idea of an intervention is in its early stages, and there's no guarantee that Trump's team would entertain a conversation requiring such comprehensive changes for a candidate who has resisted calls to moderate his tone or reel in his most outlandish political positions.

Sources in the candidate's orbit tell NBC News Trump is aware of the dissatisfaction within the party. But while some labeled the state of affairs "Crazytown" and "worse than ever," they also described a sense of powerlessness, bemoaning the fact there's "nothing that we can do, that anybody can do right now."

While Trump has not signaled that he’ll drop out of the race, the GOP is reportedly planning on that possibility should the entire political apparatus go into DEFCON 1 mode ABC News’ Jonathan Karl wrote about this nightmare scenario:

ABC News has learned that senior party officials are so frustrated — and confused — by Donald Trump's erratic behavior that they are exploring how to replace him on the ballot if he drops out.

So how would it work?

First, Trump would have to voluntarily exit the race. Officials say there is no mechanism for forcing him to withdraw his nomination. (Trump has not given any indications that he no longer wants to be his party's nominee.)

Then it would be up to the 168 members of the Republican National Committee to choose a successor, though the process is complicated.

One Republican legal expert has advised party officials that, for practical reasons, Trump would have to drop out by early September to give the party enough time to choose his replacement and get the next nominee's name on the ballot in enough states to win.

And we shouldn’t be shocked if Trump does that in this hypothetical timeline to screw over the party establishment. He’s repeatedly threatened to run third party if he wasn’t treated fairly. Again, this does seem to be a pie-in-the-sky situation, as the billionaire has already sunk in way too much to leave, not to mention his disdain for losing, so let’s not count on this. At the same time, it should be a wake-up call for Trump to get back on message, though there’s a slim chance that that will happen soon. While Democrats may be gloating about the GOP’s internal drama, Trump is still viewed as more honest than Hillary. There’s still a way for him to win—and Clinton, who should be trouncing him, is still within a polling margin where a Trump surge could catch up with her post-convention bump…if he got his act together.

Oh, and about that Purple Heart remark:

.@realdonaldtrump, this is how one usually looks when you are awarded the Purple Heart. Nothing easy about it. pic.twitter.com/K59HLnzmhK

'We'll See You In Court!': Missouri and Texas Sue to Force Biden Admin. to Finish Building the Border Wall
Julio Rosas
ICYMI: A Private School in Florida Requires Students to Stay Home for 30 Days After Each COVID-19 Vaccine Dose
Madeline Leesman
Garland Fails to Explain Why Leftists Get Away With Attacking Police and Federal Buildings
Katie Pavlich