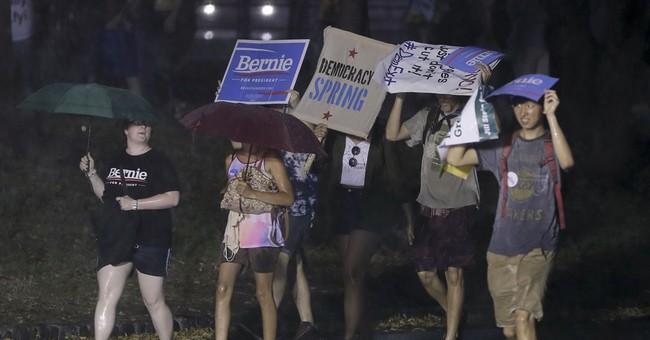 Well, if there’s anything that journalists liked about the Republican National Convention in Cleveland, it’s that it was not a logistical nightmare. In Philadelphia, it appears as if the conditions are nothing short of abysmal. We have media tents that are like ovens in the sweltering heat, coupled with few locations to find food and water. Oh, and speaking of water—the Wells Fargo Center is charging $4.50 a bottle, according to The Hill. The publication also said that other journalists and media members covering the convention described the whole situation as chaotic. To make matters worse, the media tents needed to be evacuated twice due to severe storms and lightning:

Just outside the convention center by the media tents, a handful of food trucks sizzled on the pavement, with no other food spots nearby. Inside the tents, water has only been made available by media outlets for their own staff.

Peeved reporters and editors have taken to Twitter to complain about the event’s disorganization, with some pining for their experience at last week’s Republican National Convention in Cleveland.

Criticism reverberated beyond the arena, as convention-goers fought traffic-clogged streets to traverse the city. The seven-mile trip between the Wells Fargo Center and media-sponsored events downtown easily took 60 to 90 minutes in a car.

Uber offered up free iced coffee and snacks to customers who waited for rides in an air-conditioned tent – but only after they walked across two steamy parking lots, and then waited in long lines.

“To be totally objective and nonpartisan: the logistics at DNC are appalling. Squalid hotels, sweltering workspace, no directions. Chaos,” Liberman tweeted.

Our own Guy Benson is in Philadelphia covering the convention and agreed with The New York Times’ Maggie Haberman that Cleveland was better logistically. Well, welcome to the suck, folks—and I’m not just saying that because you have to cover what Democrats say for the week. In all seriousness, it sounds like a total disaster down there.

Ceiling in press filing center at #DemsInPhilly isn't holding up well under pressure from storm. Convention has been logistical disaster.

@maggieNYT it's not even close

@maggieNYT @RaisinaSeries :) Have to agree + coffee too.