Debbie Wassermann Schultz Is Out, But Top Democrat Wants More Heads To Roll 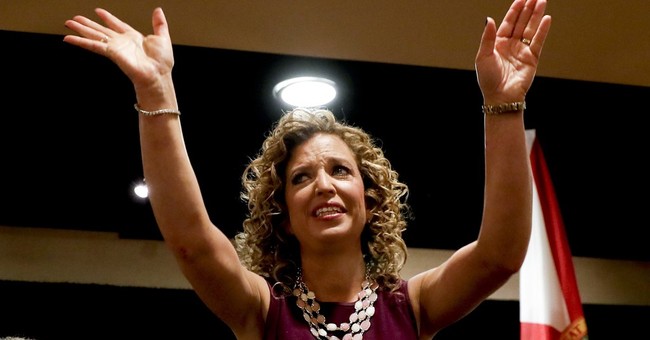 Chairwoman of the Democratic National Committee Debbie Wasserman Schultz has resigned, but the Clinton campaign tossed her a life preserver. She’ll soon be the honorary chair of the campaign once Schultz leaves her DNC position in the wake of controversial emails that seem to prove Donald Trump’s point that the Democrats actively worked behind the scenes to tilt the scales in favor of Hillary Clinton over her more progressive challenger Sen. Bernie Sanders. Cortney touched upon some of these emails that were leaked by Wikileaks last week. Some are quite nasty. One email by DNC CFO Brad Marshall suggested that a Democratic staffer ask Sanders about his religion:

It might may no difference, but for KY and WVA can we get someone to ask his belief. Does he believe in a God. He had skated on saying he has a Jewish heritage. I think I read he is an atheist. This could make several points difference with my peeps. My Southern Baptist peeps would draw a big difference between a Jew and an atheist.

Yet, back to the emails, The Huffington Post’s Howard Fineman noted that top Democrats noted earlier on Sunday that Wasserman Schultz’s time was numbered as DNC chair, though more heads may roll as a result of these correspondences that even Fineman admitted constituted grounds for dismissal. Marshall did offer an apology on Facebook, though Fineman said it doesn’t carry much weight So, will a purge happen at the DNC (via The Hill):

Former Minneapolis Mayor R.T. Rybak, a vice chairman at the DNC, told The Hill on Sunday that those involved in scheming to undermine Bernie Sanders’s presidential campaign should either resign immediately or be fired.

“The DNC needs to make a clear statement that this was wrong and that any member of the staff involved in criticizing another candidate, especially using DNC offices and equipment, should be fired,” Rybak said. “If any officer played a role in helping another candidate when we’re supposed to be neutral, they should resign. It’s that simple. Make a clear statement. Clean up this mess so we can move on and work together.”

The Hill did add that Rybak had been critical of Schultz’s leadership for quite a bit of time prior to her resignation that is to take effect immediately after the Democratic National Convention is over. At the same time, he’s right. There needs to be some house cleaning at the DNC. And while more heads should roll, they’re probably not going to, or like Schultz—there may be a slew of resignations only to end with these ex-DNC staffers being picked up by other campaigns, possibly Clinton’s. Hey, friends who have similar email problems stick together, huh?

Sanders people might seethe with rage over these emails. They should, as it shows the Democratic Party establishment was, for all intents and purposes, in the bag for Clinton. At the same time, it was totally unnecessary. Sanders had a stronger than expected showing in the primaries, but Clinton beat him decisively. Her lead expanded dramatically with the help of black Democrats south of the Mason-Dixon line. Sanders was able to recover a bit when the contests moved to the Great Plains and Pacific Northwest, but the I-95 Corridor primaries proved to be the highway of death for the Sanders camp. After those contests, it was mathematically impossible for Sanders to overtake Clinton. Moreover, her grip on the party’s superdelegates was ironclad. Clinton won, albeit a bit more bruised and bloodied than her supporters might have liked. A disheveled senior citizen, self-described Democratic socialist was able to put over $200 million into a war chest to take her on quite well—maybe the red flag was that someone like Sanders could do that well against a titan of American politics.

Hillary isn’t Bill; the 2008 and 2016 cycles have proved that point. She’s a horrible campaigner, though she has a good last name and the best political minds behind her. In that regard, Sanders jumping in did help navigate Clinton toward a more progressive stance on trade and health care. In fact, in some ways, Sanders did succeed in doing what many candidates who mount these types of campaigns aim to do when they run against someone they know they can’t beat—shift the narrative. The Democratic Party is running on the most left wing platform ever thanks to Sanders’ performance. So, in some ways, these emails about attacking Sanders’ religion weren’t just offensive—they were wholly unnecessary. At the same time, the DNC should worry that if they were fretting over how Sanders possibly beating Clinton, than how will she fare against Trump who, unlike Sanders, will attack, attack, and attack some more on her many weaknesses. Yet, before that can be answered, let’s see who’s next to resign over this internal email flap.