Of Course, The Media Went Nuts Over Melania Trump's Plagiarism Fiasco, But Went Soft On Obama's Trip Up 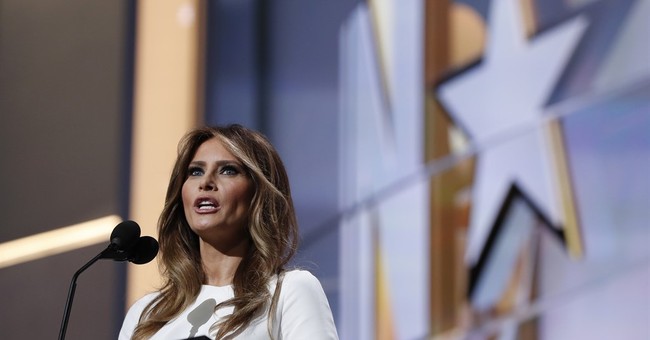 The Republican National Convention is over, but that didn’t stop the media from going nuts over the plagiarism flap that marred the first night of events. Melania Trump delivered what was a very good speech on the first night of the convention. Yet, there were a couple paragraphs that looked and sounded very familiar. Why? It was because those passages were lifted from Michelle Obama’s 2008 address to the Democratic National Convention. Team Trump had tripped up, so the media blood sports began. As Guy noted, to make matters worse, it appears as if the original author of Michelle’s speech was a Clinton speechwriter.

The Big Three (ABC, NBC, and CBS), along with CNN, MSNBC, and Fox devoted 130 minutes of their morning coverage the following Tuesday (July 19) to this unforced error. While the morning coverage could’ve been centered on Patricia Smith’s, mother of Benghazi victim Sean Smith, speech to the convention, where she slammed Clinton, blaming her for her son's death–the focus was about amateur hour in Trump world. The Media Research Center’s Rich Noyes and Mike Ciandella crunched the numbers:

The flap over Mrs. Trump's speech swamped all other convention topics, especially on cable. An examination of ABC, CBS, NBC, CNN, MSNBC and Fox News Channel coverage from 7am ET to 9am ET (a time when all six networks are providing live coverage) found 130 minutes devoted to Mrs. Trump's speech, or nearly one third of the available airtime.

CNN's New Day was the most zealous in covering the speech controversy, with 44 minutes, closely followed by MSNBC's Morning Joe, with 41 minutes (statistics are for the 7am to 9am ET hours only, although obviously there was much coverage both before and after those hours).

At the same time, the news media, specifically the Big Three, was predictably soft when then-Sen. Barack Obama lifted similar passages from speeches given by then-Massachusetts Gov. Deval Patrick (and in the video, former North Carolina Sen. John Edwards) back in 2008:

Eight years ago, however, when a similar flap threatened then-Democratic presidential candidate Barack Obama, the broadcast networks generated much less coverage — just 14 minutes of airtime, or barely one-fourth what they’ve churned out this week.

The first network coverage of Obama’s evident plagiarism appeared on Monday, February 18, 2008. Over the next day and a half, CBS produced only 2 minutes, 58 seconds of coverage, or less than one-eighth their total coverage of the Melania Trump flap.

NBC offered a nearly-identical amount of coverage — three minutes, exactly. The February 19, 2008 Today show included a long interview co-host Matt Lauer had conducted with Obama the day before, at the height of the controversy, but Lauer never asked Obama about his plagiarism.

ABC offered the most coverage, but also did the most to excuse Obama’s conduct. “Politicians steal slogans more often than comedians steal jokes,” correspondent David Wright argued on the February 18 World News.

The next morning, ABC’s Good Morning America hosted Governor Patrick for a three-and-a-half minute interview to say how delighted he was that Obama was borrowing his language. “Barack Obama’s candidacy is not only about words, it’s about really great ideas,” Patrick enthused. “I think that is the tremendous power of Barack Obama, and I’m neither surprised nor troubled that he used the words that I asked him to use of my own.”

Now, the MRC isn’t saying that this doesn’t deserve coverage. Of course, it does. What Noyes and Ciandella were noting is the amount of coverage on allegations of plagiarism from the wife of a presidential candidate, whereas an actual one, Obama, was barely scrutinized by the media when he was caught. It couldn’t possibly be because there’s a liberal media bias, right? (I’m being sarcastic of course).

Bonus: Here's Clinton calling him out during the 2008 primaries: