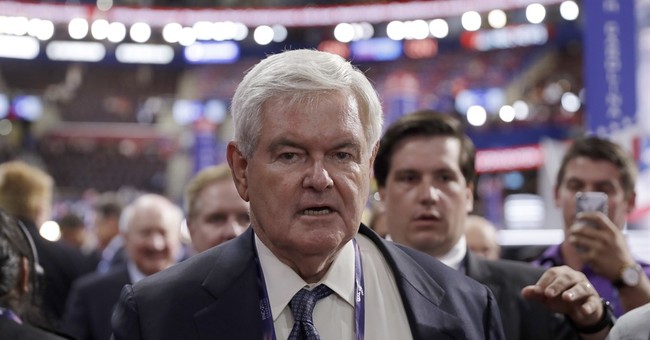 Cleveland, OHIO– Former House Speaker Newt Gingrich delivered a rather intense address to the Republican National Convention, hitting Clinton and the Obama administration for refusing to face the facts about the threats we face from radical Islamic terrorism. He went on to say that Hillary Clinton is just “incapable” of telling the truth about this threat. Secretary of State John Kerry even said that ISIS is attacking because they’re on the run.

Well, Gingrich listed off the various attacks over the past few weeks that shows ISIS and the radical Islamists aren’t on the run. He talked about the attacks in Germany, where an Afghan teen, who had an ISIS flag at his residence, attacked people on a train this week. Then, there was the attack in Nice, France that killed 84 people, the 300 dead after bombings in Baghdad, the 20 hostages who were killed in Bangladesh, the ISIS-led attack at Ataturk Airport in Turkey, the stabbing of a French policeman in France, and Omar Mateen gunning down 49 people in Orlando Florida. Mateen had pledged allegiance to ISIS during the attack. That’s just the last 37 days.

“One recent analysis estimated that since January of 2015, some 30,000 people have been killed at the hands of terrorists,” Gingrich said. “We are at war with radical Islamists, we are losing the war, and we must change course to win the war.”

Yet, he also made a point to show that this isn’t indicative of all Muslims. The vast majority of which would make good Americans, and are often the victims of attacks from these vicious terrorists. The problem is that even a small fraction of Islam’s one billion strong members provide fertile ground for new terror recruits.

“For example, Pew Research finds that just 9 percent of Muslims in Pakistan support ISIS. Unfortunately, that 9 percent is 16 million people. And that’s just one country,” he said.

Newt then discussed at length the dangers of terrorists getting their hands on weapons of mass destruction. Yet, he then tore into Clinton for her record on foreign policy, which by Newt’s calculation could bring about the death of the country.

“We are sleepwalking through history as though this is all about politics. It is not. It is about our safety and our survival as a country. And this is why every American should be terrified at the prospect of a Hillary Clinton presidency,” he said.

Clinton has proven to be a serial liar about her emails, why the system was set up, and whether classified information was on those emails when she served as our secretary of state. At the conclusion of the FBI investigation, it was discovered that Clinton did have classified information on 110 emails on 52 separate email chains, she never sought approval from State Department officials to set up that server, even if she had—it would’ve been rejected, and it was not set up out of convenience.

It’s this part of the ethos inherent within the presumptive Democratic nominee that has brought down her numbers with American voters. These lies, coupled with the inability to see the enemy we face, is a recipe for disaster. Newt was blunt, “The cost of Hillary’s dishonesty could be the loss of America as we know it.”

At times, we know when Clinton and the administration aren’t talking straight. The Syrian refugee crisis is a prime example.

“We know that Hillary Clinton and President Obama lie to the American people when they say they can safely screen the Syrian refugees. They cannot. And yet Hillary wants to increase the number by 500 percent,” he said. Many Democrats mocked the GOP security concerns, though even some liberal bloggers warned that these attacks make the Left look out-of-touch.

Gingrich concluded by saying that Trump will respect the rule of law, work to rebuild American communities that are in decline, and work to make America first again, safe again, and great again—the major themes of this convention.