What?! This School Objected to Hosting Police on Campus For The RNC 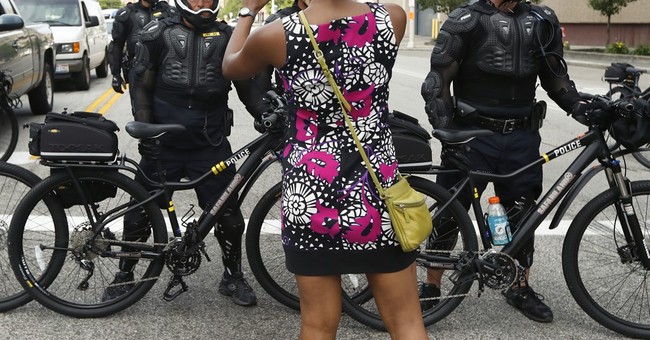 While taking an Uber ride to my hotel, my driver discussed some of the security that’s being taken for the Republican National Convention. He said that officers from all over were being brought in to help out, that the National Guard will be stationed in some areas, and that about 2,000 officers are being housed in nearby Case Western Reserve University. The name of the school wasn’t familiar, but I remembered reading about a local Ohio college, where some of its students were not happy that the “police state” had arrived on campus.

Although school is pretty much off for the week of the convention, that did not stop students from sending a petition to the administration to voice their concerns and fears about the police.

Yep: some folks are worried for the safety of the students because the police are around. Of course, Campus Reform had a post on the insanity:

Student have started a Change.org petition asking the administration to guarantee student safety while 1,900 police and National Guardsmen are housed at CWRU, and to limit the officers’ privileges during their stay. The petition had garnered just 360 signatures at press time, out of a goal of 500.

Taru Taylor, a law student and petition coauthor, said the university is placing the concerns of their police guests over those of students.

“The primary concern is the safety of the campus community,” Taylor said, citing instances of police misconduct. “Also, there’s a sense in which the university should be a scholarly environment, a sanctuary from the police state.”

Petition supporter and CWRU alum Shannon Groll wrote in a comment that she fears for students staying on campus at the same time as police.

“As an alum of CWRU, I relied on feeling safe in my identity on campus,” Groll writes. “I am scared and concerned for students of color, queer* and trans* students and all university community members at the mercy of an arbitrarily expanded police force without clear oversight or attachment to the community. Please, protect CWRU as a safe space for all bodies.”

Supporter Keith Fitch hopes CWRU has the best intentions in mind for students.

“I am deeply troubled by the presence—even temporarily—of a militarized police force on the CWRU campus,” Fitch states in his comment. “The number one priority for an educational institution is to guarantee a safe environment for its students, faculty, and staff. The requested considerations are the bare minimum of what the University should guarantee the CWRU community.”

Kids—grow up. There needs to be a lot of security at these conventions, and police need some place to stay. It’s just for a week. It’s not the end of the world, and these members of law enforcement don’t have the time, let alone the intention, to harass the crying whine burgers that are the Millennial generation at Case Western. They’re here to ensure safety for a major political party’s convention. They have serious security matters to deal with … in the real world.