Turkish President Is Cleaning House Against His Enemies 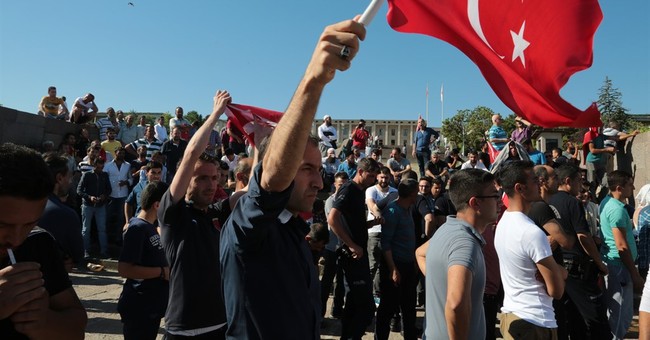 Cortney wrote about how over 2,700 judges had been fired due to their alleged ties to Fethullah Gülen. Army officers and Constitutional Court members have been detained. The Turkish Constitutional Court is the highest legal authority in the country. It would be akin to Justice Ruth Bader Ginsburg being arrested. So far, 265 deaths, 104 coup plotters 161 civilians and police, are reported to have been killed during the coup attempt. CNN Turk has been keeping track of those who have been detained. Erdogan looks to cleanse the military, and purge the forces within the political infrastructure that he feels is responsible for this coup—and those who might pose a threat to the government (via Reuters):

Gunfire and explosions had rocked both Istanbul and Ankara through the night after soldiers took up positions in both cities and ordered state television to read out a statement declaring they had taken power. However, by dawn the noise of fighting had died down considerably.

About 50 soldiers involved in the coup surrendered on one of the bridges across the Bosphorus Strait in Istanbul after dawn on Saturday, abandoning their tanks with their hands raised in the air. Reuters witnesses saw government supporters attack the pro-coup soldiers who had surrendered.

By Saturday afternoon, CNN Turk reported that security forces had completed an operation against coup plotters at the headquarters of the military general staff. Security sources also said police detained about 100 military officers at an air base in the southeast.

#BREAKING Turkish FM says he spoke with his Greek counterpart, says he told him 8 traitors will be handed over to TR as soon as possible