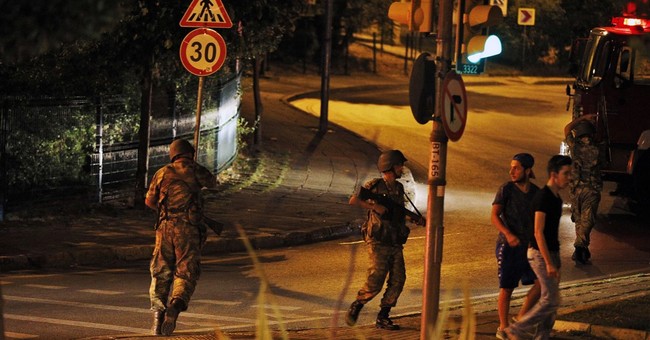 UPDATE: It’s chaos. We cannot confirm which units are fighting one another. CNN Turk reports that 17 police officers were killed in an attack near the Special Ops headquarters, a Turkish F-16 fighter shot down a helicopter used by pro-coup forces, and we have footage of police arresting members of the military.

UPDATE II: While there are reports of sporadic confrontations between pro-coup forces and protestors, it appears as if the coup has failed. Explosions have rocked the parliament building, injuring 12 people. Turkish state television–TRT–is back on the air. CNN Turk said that the anchor that read the coup plotters statement did so at gunpoint. Government officials are back in their offices, though there are some reports that parliament members are still in hiding. CNN’s Anderson Cooper and others were noting that not taking the Turkish president and prime minister into custody at the start of this action seems to be failing “coup 101.”

Still the situation is tenuous, but it looks as if the coup plotters are not going to be successful. Based on reports, President Erdogan is back in Istanbul after his requests for asylum were denied in Germany.

One thing CNN is noting is that the coup plotters went after TRT state news station, which isn’t popular, instead of private news organizations, like CNN Turk, which broadcasted Erdogan’s call for mass protests. Turkish troops are currently at CNN Turk; they’ve entered the building, so that station might go dark soon. But it looks as if the coup has failed. We’ll keep you updated.

#Turkey's Erdogan has landed in #Istanbul, his aides say. #TurkeyCoup

BREAKING: Top Turkish official says coup attempt appears to have been unsuccessful, all government officials in charge of their offices.

BREAKING: Anadolu Agency reports a bomb has hit the Turkish parliament in Ankara.

BREAKING A group of soldiers landed in Dogan Media Center where @cnnturk is based. They have entered the studio. pic.twitter.com/D2QMF6s8Xt

UPDATE III: And this is why no one should think this is coup is over just yet.

UPDATE IV: President Erdogan is on the ground at Ataturk Airport in Istanbul.

UPDATE V: Via WaPo, President Erdogan declares that his government is in control, though at least 42 people have died in Ankara.

BREAKING: NTV television quotes prosecutor's office in Ankara saying at least 42 people have been killed in 'attacks' in the capital.

There’s a full-blown military coup occurring in Turkey. At first, Prime Minister Binali Yildirim said that this action began with a contingent of troops that disobeyed orders. Tanks and troops have been sighted in Ankara and Istanbul, and all flights have been cancelled. There’s also a social media blackout. The military took over the Turkish Radio and Television Corporation (TRT) building, confiscated the phones of the people who work there, and issued a statement that they’ve taken over the government.

(Editor's Note: This appears to have been a false observation). In their statement, the military said their aim is to:

…"reinstall the constitutional order, democracy, human rights and freedoms, to ensure that the rule of law once again reigns in the country, for the law and order to be reinstated".

At first, the elected government said that they would prevail and overcome the coup. Now, it seems as if they’re in hiding, with CNN reporting that they have no clue as to the whereabouts of the Turkish president or any of his ministers. This coup was executed while President Tayyip Erdogan was on vacation. Initially, there were reports that maybe the statement didn’t represent the whole military, though it was certainly not authorized by the high command. There are reports from CNN Turk that the head of Turkey’s Armed Forces, Hulusi Akar had been taken hostage. Martial law and a curfew have been imposed, with broadcasts going off air.

We also have reports of gunfire in the capital of Ankara. Helicopters are reportedly firing at the national intelligence headquarters, according to Reuters. Additionally, tanks are said to have opened fire near parliament.

Revelers run for cover from gunfire in Istanbul amid attempted coup https://t.co/Be68wTHEqD pic.twitter.com/hXTuOtWWRY

While Skyping on the phone of a Turkish journalist, President Erdogan said that the people should take to the streets. Many have answered that call, though he’s reportedly seeking asylum in Europe—most likely Germany.

Concerning the U.S., The State Department did confirm that martial law and a curfew had been imposed, and that American citizens in Turkey should take cover and not attempt to reach the U.S. Embassy or any consulates in Turkey at this time.

As for the military, the long-standing policy of not operating in countries that have been usurped in a coup is tricky, as our base in Incrilik would have to be vacated until further notice. That’s going to hamper our air strikes against the Islamic State in neighboring Syria and Iraq.

Good point @barbarastarrcnn, the U.S. is legally barred from assisting any military that perpetrates a coup. #awkward