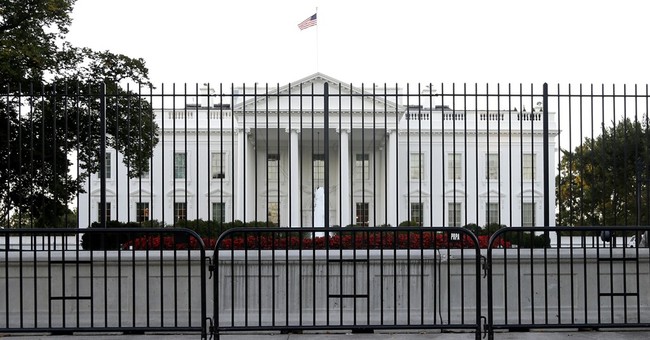 UPDATE: During today's press briefing, White House Press Secretary Josh Earnest said there are no plans of illuminating the residence blue in honor of the officers killed in Dallas.

The White House lowered the flags to half-staff in the wake of the horrific Dallas attack on July 7 that left five police officers dead. It’s one of the deadliest attacks on law enforcement in 100 years. During that night, Micah Xavier Johnson, angered by white people, and wanting to kill them, especially white police officers, opened fire at the conclusion of a peaceful Black Lives Matter protest. Nine other officers were also wounded in the attack. Yet, a request by the Federal Law Enforcement Officers Association to cover the White House in blue lighting last Friday [July 8] was reportedly ignored by the Obama administration (via PoliceMag):

"While we appreciate the President's proclamation to have our flag flown at half-mast in honor of our fallen Dallas police heroes, I respectfully request that he demonstrate his full respect for their ultimate sacrifice by illuminating the White House in blue. Actions speak louder than scripted words, and the honorable act of displaying law enforcement's 'Thin Blue Line' at the White House would demonstrate the President's sincere commitment to our fallen heroes and their families.

"Please know that the law enforcement community draws no comfort from Speaker Ryan's remarks that it's 'A time for healing.' As Speaker Ryan made that statement today, a police officer was shot in Missouri. We can't heal while law enforcement officers continue to bleed.

"Please know that the law enforcement community draws no comfort from House Minority Leader Pelosi's dispassionate remarks when she quoted Dr. Martin Luther King, Jr. today. We don't need her self-serving quotes from Dr. King; we need her to exude the leadership of Dr. King.

"I respectfully ask that all elected officials drop their scripted speeches, and feel the pain resonating in Dallas and across the country. Light a blue candle and say a silent prayer, but don't insult the law enforcement community with perishable scripted gibberish. Five honorable heroes made the ultimate sacrifice in Dallas, and it would be a tribute to their service by illuminating the White House in blue.

"May all our fallen heroes rest in honor, and blessed eternal peace."

The White House was not dimmed to blue lighting. Now, this really wouldn’t be an issue since they did order that all government buildings to lower their flags, but the official residence was turned into a rainbow on the day the Supreme Court struck down laws banning same-sex marriage. If they’re worried that turning the White House blue might look political, that’s weak sauce. If a gay marriage ruling can move the White House to taste the rainbow, then illuminating it in blue for the five officers who were all but assassinated in Dallas isn’t just appropriate—it’s required.

Texas Governor’s Mansion lit blue for next 5 nights in honor of our fallen officers. #DallasStrong pic.twitter.com/zKkzQUtkhT