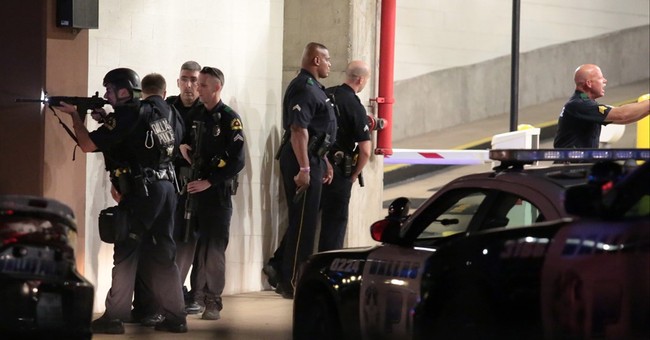 Christine wrote about the tragic event that took place in Dallas, Texas last night. Members of the community gathered to protest the police-related shooting deaths of Alton Sterling in Louisiana and Philando Castile in Minnesota. What was a peaceful protest devolved into a horrific attack on law enforcement that left 12 police officers shot. Five were killed. The attack occurred when two snipers opened fire from elevated positions near Dealey Plaza. People were running for their lives as rifle fire was heard. It’s one of the worst attacks on law enforcement in a century (via NBC News):

The shooting deaths of at least five officers Thursday night in Dallas sadly ranks as one of the deadliest attacks on U.S. law enforcement in the past 100 years.

The toll could rise, as Dallas police said at least seven other officers were wounded, including two who were in critical condition.

It’s a ghastly scene. There is footage, which I will not link, of one of the alleged shooters shooting a police officer. During a press conference in the early morning hours, Police Chief David Brown said that three suspects, one female, two male, are in custody. There was a fourth suspect that was held up at the El Centro College parking garage, where he threatened to kill more cops, saying that the end was near, and that there were bombs all over the complex. He exchanged gunfire with law enforcement as they tried to negotiate an end to the situation. The police eventually killed him with a bomb robot. No bombs were found in the immediate area.

The White House and The Texas Governor’s Office have contacted Dallas Mayor Mike Rawlings to extend their assistance. ATF and FBI agents are on the scene as well. Prior to the attack, Dallas Police Department seemed to be standing in solidarity with the protestors. They are known for being the most transparent police departments in the country, who were protecting Americans’ constitutionally protected right to assembly—until some people decided to target them.

We just lost another. Officer Down

Until today, 51 officers were killed in the line of duty so far this year. Unbelievable that the number jumped so much in one night