Like Clinton, Others Were ‘Extremely Careless’ Regarding Handling Classified Information–But They Got Pinched 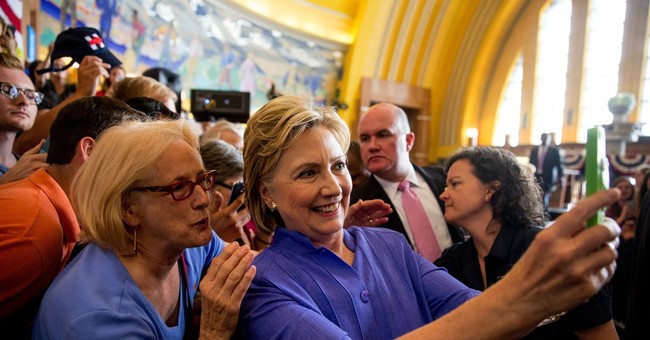 Katie wrote about the FBI’s decision recommending charges not be brought forward against Hillary Clinton after the prolonged investigation into her email use. This is what was said by FBI Director Comey during the briefing this morning:

The FBI also discovered several thousand work-related e-mails that were not in the group of 30,000 that were returned by Secretary Clinton to State in 2014. We found those additional e-mails in a variety of ways. Some had been deleted over the years and we found traces of them on devices that supported or were connected to the private e-mail domain. Others we found by reviewing the archived government e-mail accounts of people who had been government employees at the same time as Secretary Clinton, including high-ranking officials at other agencies, people with whom a Secretary of State might naturally correspond.

This helped us recover work-related e-mails that were not among the 30,000 produced to State. Still others we recovered from the laborious review of the millions of e-mail fragments dumped into the slack space of the server decommissioned in 2013.

For example, seven e-mail chains concern matters that were classified at the Top Secret/Special Access Program level when they were sent and received. These chains involved Secretary Clinton both sending e-mails about those matters and receiving e-mails from others about the same matters. There is evidence to support a conclusion that any reasonable person in Secretary Clinton’s position, or in the position of those government employees with whom she was corresponding about these matters, should have known that an unclassified system was no place for that conversation. In addition to this highly sensitive information, we also found information that was properly classified as Secret by the U.S. Intelligence Community at the time it was discussed on e-mail (that is, excluding the later “up-classified” e-mails).

None of these e-mails should have been on any kind of unclassified system, but their presence is especially concerning because all of these e-mails were housed on unclassified personal servers not even supported by full-time security staff, like those found at Departments and Agencies of the U.S. Government—or even with a commercial service like Gmail.

Saying that Clinton and her crew were “extremely careless” with this information sure sounds like gross negligence, as far as the law is concerned:

Shall be fined under this title or imprisoned not more than ten years, or both.

You don’t need intent to violate the gross negligence statute. Moreover, other people have been convicted for mishandling classified material for acting just like Clinton did with her email usage.

In 2015, Navy reservist Bryan Nishimura downloaded classified information onto electronic devices during his deployment in Afghanistan in 2007 and 2008. In the same year, Gen. David Petraeus pleaded guilty to handing over classified black books to his biographer Paula Broadwell, later revealed to be his mistress, in which he got two years' probation, along with a $100,000 fine.

In 2005, former Clinton National Security Adviser Sandy Berger admitted to improperly removing highly sensitive terrorism documents from the National Archives, reportedly stuffing them down his socks and pants. He was later handed down a $50,000 fine, two years' probation, and 100 hours of community service as punishment.

In a chandeliered room at the Justice Department, the longtime head of the counterespionage section, the chief of the public integrity unit, a deputy assistant attorney general, some trial lawyers and a few FBI agents all looked down at their pant legs and socks.

While waving his own leg in the air in illustration, Paul Brachfeld, inspector general of the National Archives and Records Administration, asked the group rhetorically if "something white" could be easily mistaken if it was wrapped around their legs, beneath their pant legs.

Under debate during the Nov. 23, 2004, meeting was Brachfeld's contention that President Clinton's former national security adviser Samuel R. "Sandy" Berger could have stolen original, uncatalogued, highly classified terrorism documents 14 months earlier by wrapping them around his socks and beneath his pants, as National Archives staff member John Laster reported witnessing.

Brachfeld said he was worried that during four visits in 2002 and 2003, Berger had the opportunity to remove more than the five documents he admitted taking. Brachfeld wanted the Justice Department to notify officials of the 9/11 Commission that Berger's actions -- in combination with a bungled Archives response -- might have obstructed the commission's review of Clinton's terrorism policies.

All of these actions were negligent, like sending or receiving 110 classified emails featured on 52 separate email chains, among other things. People have been convicted for lesser or equally egregious instances of gross negligence regarding the safekeeping of sensitive information. In Clinton's case, it's slightly different. She was our nation's top diplomat. She should've been held to the same standard as Petraeus, who was our CIA director.