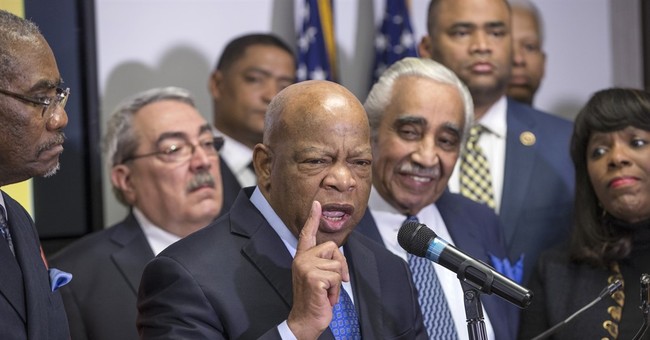 Despite Speaker of the House Paul Ryan stating that there will be a vote on gun control sometime this week, the Congressional Black Caucus plans to be as “disruptive” as possible when the House reconvenes after the Fourth of July recess. (via The Hill):

The caucus said its members should be "as disruptive to Speaker [Paul] Ryan [R-Wis.] as possible next week" when the House gets back on Tuesday as part of a "day of action on the floor in regards to gun violence," the memo, sent to Democratic offices, said.

Members will give speeches pushing for more restrictions on the possession and use of guns, the Examiner reported. They will also attend a House Rules Committee hearing on Tuesday afternoon, where legislation on terrorism and gun control will be addressed.

"During Votes – Members are encouraged to have a picture (not poster board, but a printed piece of paper with an image of a constituent killed by a firearm)," the memo said.

The measure that’s to be taken up in the House is Sen. John Cornyn’s (R-TX) bill that provided due process of law provisions into the Democrats’ “no-fly, no-buy” bill that blocked terror suspects from buying firearms (via Politico):

The GOP proposal — already rejected by the Senate — would require the Justice Department to go to court to prove "probable cause" that a person is involved in terrorism before he or she is barred from purchasing a firearm. Law enforcement agencies would have 72 hours to try and stop the gun sale. Democrats largely oppose the proposal, which has the backing of the National Rifle Association. Democrats have pushed their own proposal that would bar anyone who is on the federal "No fly" list from buying a gun, but Republicans and the NRA say that goes too far.

Rep. John Lewis (D-GA), who spearheaded the House sit-in that led to a vote on gun control, was on the no fly list, as was the late Sen. Ted Kennedy (D-MA). There is ample evidence that there are people on these secretive government lists that have zero ties to terrorism, though their gun rights would be stripped if the Democrats have their way. That’s overreach. That’s unconstitutional. And Republicans should do everything they can to block these liberal gun control measures