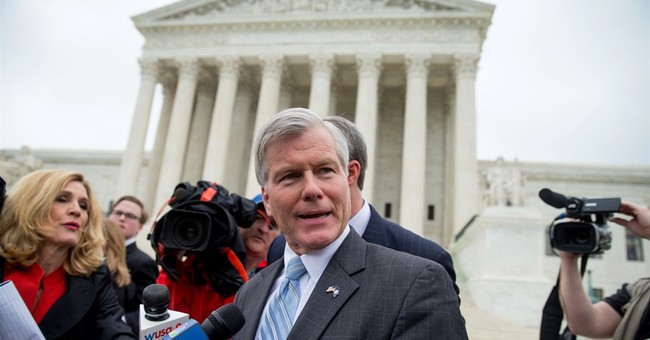 The Supreme Court may have ruled unfavorably to those who value human life, but for family and friends of former Virginia Gov. Bob McDonnell—it was a good day. The Court ruled unanimously to vacate his bribery conviction, calling the statute under which he was tried too vague. He’s not out of the woods yet. While he doesn’t have to serve a two-year prison sentence now, prosecutors could try him again (via NBC News):

The U.S. Supreme Court on Monday tossed out the bribery conviction of former Virginia Governor Robert McDonnell, who was found guilty of accepting thousands of dollars in cash and gifts.

The decision rejected the federal government's view of how broadly federal bribery laws can reach.

And it spares McDonnell from having to report to prison to serve a two-year sentence. Prosecutors could seek to put McDonnell on trial again but with different jury instructions on the definition of corruption.

A jury convicted him in 2014 on a host of federal bribery charges for accepting $175,000 in money and luxury goods from a Virginia businessman who wanted help getting two state universities to conduct research on a diet supplement.

The MLB's Unforced Error Could Be Georgia's Walk Off Homerun
Townhall
'I can't stay silent': High school math teacher says that 'antiracist' training 'is the opposite of truth in advertising'
Twitchy
Steak Umm Schools Us About Bottom Line Versus Being Woke
Redstate
[WATCH] CNN Director Admits Network Ran 'Propaganda' to Get Trump 'Voted Out'
PJ Media