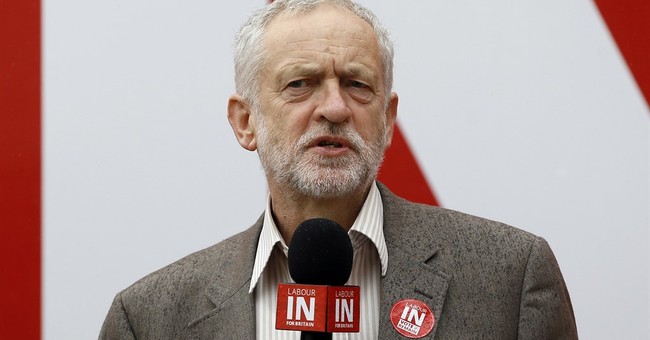 UPDATE: Make that 11 shadow cabinet ministers that have bolted. Shadow attorney general Karl Turner has decided to call it a day working under Corbyn.

Resignation letter in full. Will be making no further comment to the press. pic.twitter.com/9C9nhiLD5E

Well, that coup might be happening sooner than expected. Labour Party Leader Jeremy Corbyn, who was criticized for lack of leadership during the Brexit referendum, has seen

Westminster Public Affairs, a PR company, has conducted a survey of 50 people who stood as Labour candidates in 2015. It says 62% of them think there should be a leadership contest.

Most of us in labour worked our socks off for #Remain vote - to see just how others in positions of influence half hearted about it gutting!

Labour MP on why they're acting now: "There's no safe seat north of Islington."

I've just spoken to Jeremy Corbyn to tell him that with regret I'm resigning from the Shadow Cabinet. pic.twitter.com/deLbWYaczd

More from the BBC:

Heidi Alexander, Lucy Powell, Vernon Coaker and Ian Murray are among those to have quit the party's top team.

It comes after shadow foreign secretary Hilary Benn was sacked after he told Mr Corbyn he had lost confidence in him.

Mr Corbyn, who faces a no confidence vote over a "lacklustre" EU campaign, "won't be resigning", a spokesman said.

The spokesman said Mr Corbyn "is the democratically elected leader of the Labour Party".

Sources close to Mr Corbyn said he would stand again in the event of any leadership election - while Mr McDonnell said he would chair his campaign again.

Speaking on Sunday's Andrew Marr Show, Mr Benn - who has ruled out any Labour leadership bid - said Mr Corbyn was "a good and decent man but he is not a leader".

Even members of the UK media agree that it’s time for Corbyn to leave:

I don’t agree that his time as leader has been a disaster – leave would have won the referendum regardless. It would always have turned the debate into a conversation about immigration and hammered out its racist cant, whoever opposed it. A more centrist Labour leader would have made more concessions – offered bogus and unworkable migrant caps – but the more strident voice would still have won. Corbyn has been a one-man Occupy movement, squatting in the office of Labour leader on behalf of the people (of whom I was one) who felt the party’s high command was lifeless and intellectually spent. The point has been made, and the apparatus now has to be put to better use.

As the media once again speculates what’s to happen next, especially regarding shadow cabinet resignations, it’s pretty clear that all-out civil war has broken out—with Corbynites moving quickly to stop the bleeding:

Labour plotters' goal to force Corbyn to resign by making life difficult as possible - effectively going on strike, no support in PMQs etc

The attempted coup has triggered a fierce response from Corbyn supporters, with Len McCluskey threatening MPs who are tweeting and briefing against the leader that they could face mandatory reselection. Unite’s [the largest union in the UK and Ireland] general secretary said his union would find it difficult to maintain its opposition to rules making it easier to remove sitting MPs if the hostility continued.

In an article for the Guardian, McCluskey writes: “Unite has hitherto opposed any plans to change the party rules governing mandatory reselection of Labour MPs. That, too, we have looked on as a divisive distraction.

“But those MPs who have missed no opportunity to tweet and brief against the party’s elected leader over the last 10 months will find that their disloyalty finds no favour with party members and will make this an increasingly difficult line to hold.”

He also warned that if MPs tried to block Corbyn from standing again in the face of a leadership challenge it could “split the party”.