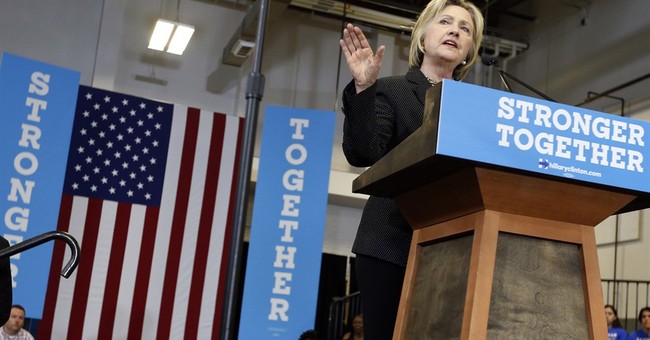 So, remember the promise of transparency Hillary Clinton offered regarding financial donations, especially those going to her family non-profit, which she reiterated after scores of donations were discovered to be undisclosed? Yeah, she’s still not out of the woods on this front. The Associated Press reviewed Clinton’s official calendar when she served as secretary of state and found that scores of missing meetings with political and Foundation donors were omitted. AP added that these revelations only compound the growing concerns that Hillary isn’t trustworthy or honest, given how she and her minions seem to have been less than forthcoming concerning the documentation of her time as our top diplomat (via AP):

An Associated Press review of the official calendar Hillary Clinton kept as secretary of state identified at least 75 meetings with longtime political donors, Clinton Foundation contributors and corporate and other outside interests that were not recorded or omitted the names of those she met. The fuller details of those meetings were included in files the State Department turned over to AP after it sued the government in federal court.

The AP found the omissions by comparing the 1,500-page calendar with separate planning schedules supplied to Clinton by aides in advance of each day's events. The names of at least 114 outsiders who met with Clinton were missing from her calendar, the records show.

No known federal laws were violated and some omissions could be blamed on Clinton's highly fluid schedule, which sometimes forced late cancellations. But only seven meetings in Clinton's planning schedules were replaced by substitute events on her official calendar. More than 60 other events listed in Clinton's planners were omitted entirely in her calendar, tersely noted or described only as "private meetings" — all without naming those who met with her.

In one key omission, Clinton's State Department calendar dropped the identities of a dozen major Wall Street and business leaders who met with her during a private breakfast discussion at the New York Stock Exchange in September 2009, The meeting occurred minutes before Clinton appeared in public at the exchange to ring the market's ceremonial opening bell.

Despite the omission, Clinton's State Department planning schedules from the same day listed the names of all Clinton's breakfast guests — most of whose firms had lobbied the government and donated to her family's global charity. The event was closed to the press and merited only a brief mention in her calendar, which omitted all her guests' names — among them Blackstone Group Chairman Steven Schwarzman, PepsiCo CEO Indra Nooyi and then-New York Bank of Mellon CEO Robert Kelly.

There are many other CEOs listed in the story. The news organization asked for Clinton’s calendar and schedule back in 2013, but the State Department wouldn’t say they even had those documents. The Associated Press was forced to file a lawsuit against State to obtain the documents in 2015, which were then finally turned over for review. They noticed that unlike her planning schedule, her calendar was edited after each of the former secretary of state’s events. Clinton, Huma Abedin, and scheduling assistant Lona J. Valmoro held weekly meetings over her schedule and corresponded by email over Clinton’s plans daily. Whoever edited the calendar, which was kept on Microsoft Outlook, is unknown. Both Abedin and Valmoro now work on Clinton’s 2016 campaign.

While AP said that nothing seems to be particularly felonious regarding these calendar changes, the accuracy of Clinton’s record at State relating to “depictions of Clinton's access to political, corporate and other influences” could be skewed. For example, Clinton met with multi-millionaire and Clinton 2016 super PAC donor S. Daniel Abraham many times, but some of these meetings were listed as private with his name omitted for the record.

It’s these antics that reek of prevarication of accountability concerning the activities of Clinton's inner web of political donors and the donations that flow into her war chest from these people. It shows that Clinton may view herself as playing by a different set of rules. If not, then it’s the criticism that she's playing politics all the time, always thinking ahead of the next move. Both narratives are still heavily ingrained in the American public, which is why the ethical questions over donations to the Foundation and her self-inflicted wound relating to her email server have gained traction with voters.

Guy reminded us that the Clinton Foundation hasn’t been completely transparent at all. It seems neither can be said about her time at State, where, among other things, she tried to hide many a private meetings with high-level donors and corporate interests. Moreover, it doesn't help that Janice Jacobs, an ex-diplomat who was brought back to State to be its "transparency czar" gave the maximum individual donation to the Clinton campaign.

As for Clinton's emails, the Brexit vote might bury the latest, though serious nugget, where it appears that problems plaguing her server caused the State Department's official anti-hacking protections to be disabled. This will surely be revisited, but shows that the omitted meetings with high roller donors and server issues that impacted the official State network will remain salient issues. The IG report over this email fiasco pointed to the Clinton team never approaching State officials about her private email system, and that it would've never been approved if she had been forthright. Clinton had maintained that this system was allowed. It apparently wasn't and for good reason. Concerning her calendar changes, it will surely only increase the suspicion that supporters of Vermont Sen. Bernie Sanders have about the former first lady. For Trump, this is fresh political ammunition to use against "crooked Hillary."