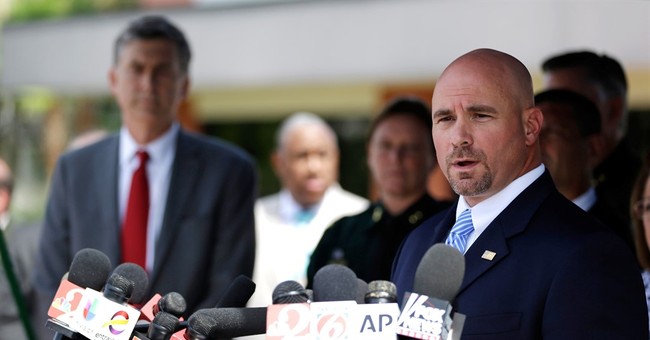 As promised by Attorney General Loretta Lynch on Sunday, a partial transcript of the 911 call between Orlando shooter Omar Mateen and the Orlando Police Department was released, though it was edited to remove the terror organizations he swore allegiance to during those interactions, a move that was controversial. Now, the FBI has released a more complete transcript. Katie noted earlier that “Allah” is replaced with the word “God” in the redacted version. That edit appears to remain in this new version (via FBI):

2:35 a.m.: Shooter contacted a 911 operator from inside Pulse. The call lasted approximately 50 seconds, the details of which are set out below:

OD: Emergency 911, this is being recorded.

OM: In the name of God the Merciful, the beneficent [Arabic]

OM: Praise be to God, and prayers as well as peace be upon the prophet of God [Arabic]. I wanna let you know, I’m in Orlando and I did the shootings.

OM: My name is I pledge of allegiance to Abu Bakr al-Baghdadi of the Islamic State.

OM: I pledge allegiance to Abu Bakr al-Baghdadi may God protect him [Arabic], on behalf of the Islamic State.

OD: Alright, where are you at?

OD: Where in Orlando?

In a press release, the Justice Department said that the edits have caused a distraction, and that the re-issued transcript was to “provide the highest level of transparency.”

Unfortunately, the unreleased portions of the transcript that named the terrorist organizations and leaders have caused an unnecessary distraction from the hard work that the FBI and our law enforcement partners have been doing to investigate this heinous crime. As much of this information had been previously reported, we have re-issued the complete transcript to include these references in order to provide the highest level of transparency possible under the circumstance.

So, while this version is a little less insulting (we all could've fill in the blanks here, folks), the fact that this isn’t the full transcript–copied verbatim–is still somewhat troubling. The updates to this investigation are seemingly peppered with political correctness. We all know the guy was saying "Allah."