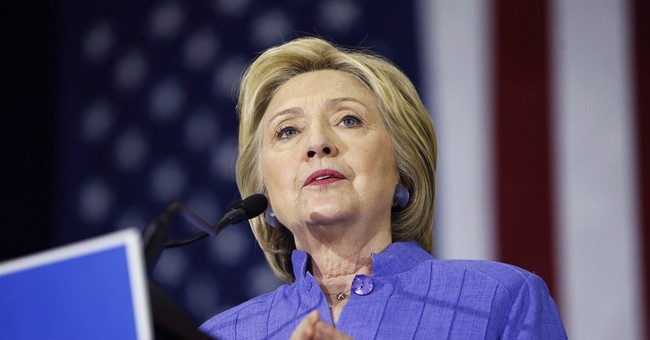 Well, it’s already begun—even before the bodies of the victims of the Orlando shooting can all be identified, the anti-gun commentaries have been pouring in because that makes perfect sense in the wake of a likely terrorist attack*. Nevertheless, it appears that Hillary Clinton has used the incident to call for a new assault weapons ban[emphasis mine]:

I join Americans in praying for the victims of the attack in Orlando, their families and the first responders who did everything they could to save lives.

This was an act of terror. Law enforcement and intelligence agencies are hard at work, and we will learn more in the hours and days ahead. For now, we can say for certain that we need to redouble our efforts to defend our country from threats at home and abroad. That means defeating international terror groups, working with allies and partners to go after them wherever they are, countering their attempts to recruit people here and everywhere, and hardening our defenses at home. It also means refusing to be intimidated and staying true to our values.

This was also an act of hate. The gunman attacked an LGBT nightclub during Pride Month. To the LGBT community: please know that you have millions of allies across our country. I am one of them. We will keep fighting for your right to live freely, openly and without fear. Hate has absolutely no place in America.

Finally, we need to keep guns like the ones used last night out of the hands of terrorists or other violent criminals. This is the deadliest mass shooting in the history of the United States and it reminds us once more that weapons of war have no place on our streets.

This is a time to stand together and resolve to do everything we can to defend our communities and country.

“Weapons of war”: where have I heard that phrase before? Oh, that would be The New York Times’ op-ed that said such weapons, like the AR-15, should be banned, and that Americans who own such weapons should give them up for the “good of their fellow citizens”:

Certain kinds of weapons, like the slightly modified combat rifles used in California, and certain kinds of ammunition, must be outlawed for civilian ownership. It is possible to define those guns in a clear and effective way and, yes, it would require Americans who own those kinds of weapons to give them up for the good of their fellow citizens.

President Obama used that phrase as well when Robert Lewis Dear opened fire at a Planned Parenthood center in Colorado last year. As many observed after his arrest, Dear is totally insane. In May, he was ruled incompetent to stand trial. Yet, the fact remains that when the Left uses the phrase “weapons of war,” they’re talking about the AR-15 rifle.

This likely act of terrorism in Orlando is appalling, but banning semi-automatic rifles (because liberals find them scary) will not stop these occurrences. Rifles and shotguns are rarely used in gun crimes, and there really isn’t anything unique about them:

The “assault weapons” for sale in the U.S. now aren't really weapons of war. Many people mistake these firearms for machine guns capable of shooting multiple rounds of ammunition with a single pull of the trigger. The federal government banned the sale of machine guns to civilians in 1986. (The National Rifle Assn. likes to claim that gun laws never work, but the machine gun ban has worked just fine. Such guns are almost never used in criminal activity, and none of the recent mass shootings in the U.S. involved a machine gun. The San Bernardino terrorists tried to modify one of their guns to turn it into a machine gun.)

These rifles are easy to use, even for beginners. They are accurate, have little kick and are highly customizable with add-ons such as special sights and grips. In part because of these attributes, and in part because of their sleek military styling, these guns have become hugely popular among law-abiding gun owners.

As a matter of functionality, these guns are just like other rifles. They're more powerful than some handguns and rifles, and less powerful than others.

They're “semiautomatic” — a technical term that applies to the way rounds are chambered, not to the way the guns shoot. Many handguns are semiautomatic too. Military-style rifles fire only one round for each pull of the trigger, just like a revolver, a shotgun, a hunting rifle or any other of the 300 million legal guns in America.

This is a horrific day for the country. There was going to be no law that honors the tenets of our Constitution that would have prevented this ghastly act—and the anti-gun Left shouldn’t use it to rehash tired, stale gun control talking points that have zero chance of gaining traction. If anything, Americans should keep doing what they’ve been preoccupied with for almost the past ten years—buying guns and lining up for their carry permits. The bodies of the victims haven’t all been identified, and the families of the victims have yet to grieve. Why are we talking about gun bans?

I know why, but this battle has been fought before, a full detail of the AR-15 weapons system has been spoken about at length, and the anti-gun Left lost. Will mass shootings continue to rise? There are some people who say so, though they’re still rare and account for only one percent of all firearm fatalities. That doesn’t make them any less terrible, though it often gets blown out of proportion by the anti-gunners for all the wrong reasons.

For now, let’s pray for Orlando, though I’m sure the two sides are going to clash once again—and the pro-Second Amendment side is going to win (again).

The perpetrator of the attack, Omar Mateen, killed 50 people at Pulse nightclub around 2 a.m. this morning. This is the deadliest mass shooting in U.S. history, soon to be added to our history of being victims of terrorist attacks—both foreign and domestic.

A weapon designed for war in the hands of civilians will never make sense to me. #OrlandoMassShooting ???? pic.twitter.com/rZbugYiBjo