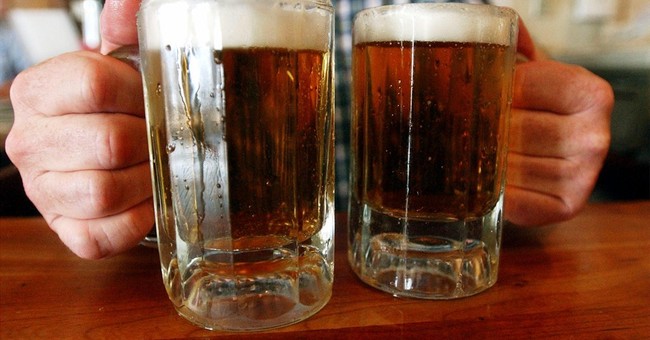 You know about how Venezuelans are rationing almost everything. Water is rationed, some of which is now dirty, making families sick. More skin rashes are occurring due to the lack of water to bathe or wash clothes and sheets. Medicine is a rare resource. Toilet paper is a luxury item. The country’s energy shortages are creating rolling blackouts and two-day government workweeks to help with curbing what little power the country has left. The hospitals are falling apart, with dead and dying babies tragically becoming a more frequent occurrence. There’s looting. There’s hunger (Venezuelans are eating out of garbage cans). There’s a breakdown of law and order. And now there’s a shortage of beer.

Yes, with the failure of 21st Century Socialism occurring all around you, you might not be able to get blackout drunk to numb yourself from the crumbling socioeconomic, and political, situation that’s occurring before your eyes. In April, Empresas Polar, which produces 80 percent of the nation's beer, was closing down a string of breweries. At the time, they couldn’t pay their suppliers (via WSJ 4/29/16):

The largest private Venezuelan company and producer of 80% of the beer consumed here began to shut down its last beer plant on Friday, the latest deprivation in a country crippled by shortages.

After Empresas Polar SA closed its three other beer plants over the past several days, the shutting of the San Joaquin plant, near Valencia, will leave just a week’s supply of beer, the company said. Like many other firms here, Polar blames the government, which hasn’t allocated the dollars the company needs to pay for imported raw materials such as malted barley.

President Nicolás Maduro’s government controls access to dollars, doling them out via a stringent currency exchange in which many companies find it hard to pay suppliers abroad.

Now, there’s some good news. Last week, Empresas Polar was able to obtain millions in loans to restart production and reemploy the 10,000 workers that were let go in the interim (via The Telegraph):

But with bars and off licences running dry, Polar said it had reached a deal for a $35 million loan from Spanish bank BBVA, putting up its shares in an investment fund as collateral.

The cash will enable the company to buy barley, hops and steel sheets for cans - enough to resume production next month and get through the rest of 2016, it said.

Some 10,000 workers at Polar's four breweries had been out of work since they suspended production.

The brewery is part of Venezuela's largest corporation, Empresas Polar, whose chief executive, Lorenzo Mendoza, has repeatedly clashed with Maduro as the economy has veered into a deep recession.

Maduro accuses the billionaire businessman of sabotaging the economy by slowing production, which the leftist leader blames for severe shortages of food and basic goods.

So, 10,000 people gave their jobs back. Yet, there’s no saying when the brewery could shut down again. President Nicolas Maduro has an army Chavista “colectivos” (brownshirts) to prevent opposition forces from organizing and rallying against in him a concerted way that could threaten his presidency. And he doesn’t seem to be in any mood to try and fix Venezuela’s rampant problems with access to food, water, and health care - he’d rather blame rich Venezuelans or the United States. But, for now, if you’re miserable in Venezuela, at least a cold beer could be waiting for you. That is unless the blackout doesn’t kill whatever refrigeration system you have. If I were living under authoritarian socialism, I would definitely have a beer - or seven.