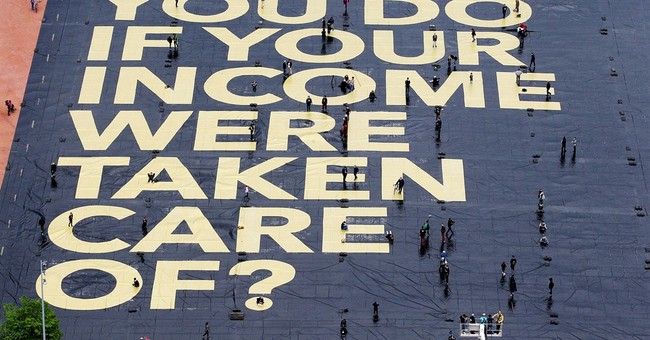 For some European states with comprehensive welfare programs, a guaranteed income proposal seemed to be a bridge too far. On June 5, Switzerland overwhelming rejected a referendum that would’ve guaranteed every Swiss citizen an income of $2,500 a month. No one in the government supported the initiative, citing the high cost and cuts to current welfare programs to sustain such a program. Yet, under Swiss law, it gathered 100,000 signatures in an 18-month period, thus it was out to the people for a vote. The people chose well. One of the fears was that it would incentivize people not to work (via CNN Money):

The vast majority of Swiss voters on Sunday rejected a referendum that would have provided every citizen a guaranteed income of $2,500 Swiss francs ($2,520) after tax, regardless of their employment status or wealth.

All told, about 77% of Swiss voters were against the measure, which lost by at least 10 percentage points in all of the country's 26 districts.

The plan would have allowed those earning less than the minimum to have their pay topped up. Those out of work would have been handed the full amount. The income would have been unconditional and untaxed, and it would have replaced various welfare payments.

The Swiss government opposed the initiative, saying it would have needed to find 25 billion Swiss francs a year to pay for it. The resulting new taxes, or spending cuts, would have damaged the economy, it argued.

The Federal Council and Parliament feared that "fewer people would choose to work" if the measure had been approved.

Switzerland was the first country to hold such a vote on basic income, though they’re not the first to consider a national basic income. Finland is mulling scrapping its welfare state by just giving their citizens, regardless of income, roughly $10,000 a year.