Poll: Half of Voters Think Hillary's Email Use Was Illegal 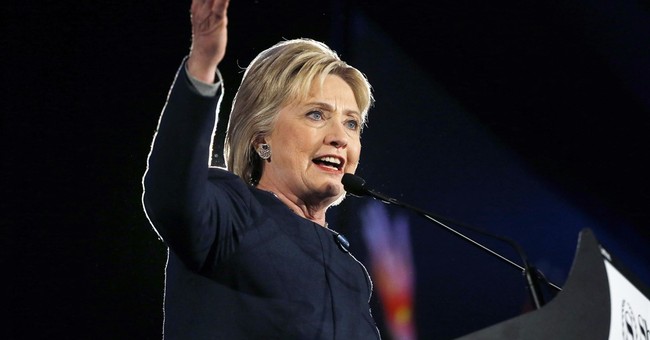 Hillary Clinton’s endless deluge of inaccuracies regarding the use of her private email server isn’t dissipating, nor is it winning over voters. Concerning who is more trusted, Donald Trump wins that contest by a two-to-one margin, albeit his numbers are also low. Nevertheless, it’s a rather humiliating reminder that the man Hillary calls a “loose cannon” is viewed as more trustworthy by the American people. As to the use of her private emails system, we now know that it would not have been approved if it were in fact brought before State Department officials. Clinton has made the claim numerous times that her email set up was allowed, thought the latest Inspector General report showed that no such review was conducted, nor was their an inquiry as to whether she could have such a system for official government business. To make matters worse, a new poll from the Morning Consult shows that half of voters view her email use as illegal:

According to a new Morning Consult national survey of 2,001 voters, nearly all of them (85 percent) have heard something or a lot about her private email usage – a key issue being raised against her by Republicans as they try to cast her as untrustworthy.

Last week, the State Department’s Office of Inspector General released a report in which it found Clinton had not complied with its records-keeping procedures. The report said while her “production of 55,000 pages of emails mitigated her failure to properly preserve emails,” the State Department still had concerns over the security of their content after it ran through a personal server in her home.

Among all voters, 48 percent view the emails as a “major problem,” while 24 percent see it as a minor problem. Just 18 percent of voters said it was no problem at all. But even among Democrats, a quarter of them think it is a major problem for Clinton, compared with 50 percent of self-identified independents and 78 percent of Republicans.

The State Department IG report also noted that Clinton violated the Federal Records Act when she deleted some 30,000 emails she thought were personal. CNN’s Jake Tapper also made sashimi out of Clinton’s claim that her server was “absolutely permitted.” Clinton has mostly avoided the press; Guy wrote that it’s been a half a year since she’s held a press conference because she knows this issue will be brought up. Whether the Clinton camp likes it or not, this is a big deal—and they totally underestimate the staying power of this self-inflicted fiasco. And if they think this is bad, just wait until we revisit the dealings of the Clinton Foundation. Unifying the party, trying to get key constituencies of the Democratic Party to like her, trying to get the average voter to like her, and show that her email use was not illegal. Oh, and that she’s a trustworthy individual who can lead us. Clinton has a lot of homework, which will be complicated by Trump’s media savvy strategy of getting cameras on him for 40 minutes to an hour at a time. When the general election campaign gets going at full speed, that’s a lot of time to bash “Crooked Hillary.”