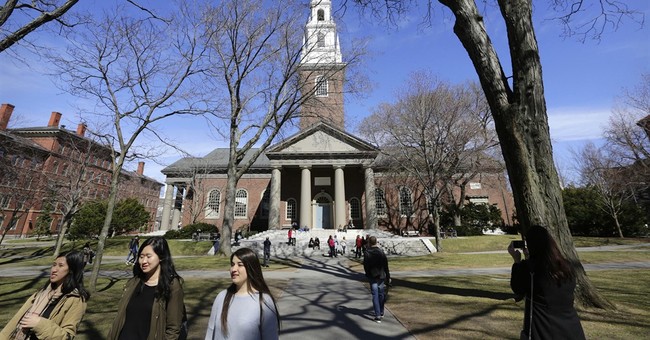 Earlier this month, The Guardian  ventured onto the campus of Harvard University, where supporters of Hillary Clinton are somewhat being driven underground. They’re afraid to publicly state they’re supporting her campaign, and have received some rather nasty exchanges from the supporters of Vermont Sen. Bernie Sanders. It’s not shocking. For starters, young voters are breaking for Sanders by wide margins. Second, this is the new era of American college life—the urge to silence those that hold differing opinions than you're own. If they're conservative, it's open season. In this case, the left is eating itself:

In April, Sam Koppelman, a 20-year-old government student at Harvard, wrote a letter to the New York Times lamenting that his support for Clinton meant that on campus he “might as well be Pat Buchanan”.

The letter was a coming out of sorts for Koppelman, who told the Guardian that despite having written frequently about politics for his student newspaper until 2012, he stopped this year for fear that it would “cast me as an outsider, cast me as someone who’s more conservative”.

“If you’re engaged in activism and you’re a part of the campus left, and then you choose to support Clinton’s campaign … that’s almost a traitorous act,” Koppelman said.

anet Ho canvassed for Clinton during the New Hampshire primary. Ho, a 19-year-old freshman, is an open advocate for the former secretary of state, but admitted that being a Clinton supporter can be difficult.

“They see the Hillary supporter as someone who doesn’t really want as much equality as they do.

“There are going to be some people on either side who are going to be really emphatic about what they believe,” said Molly Roberts, a 22-year-old senior studying English who writes a column for the Harvard Crimson, the university’s student newspaper.

“And then you know, if they’re jerks in the first place maybe they’ll get vitriolic.”

Roberts has not been cowed by the potential for jerks to become vitriolic. In February, she wrote about her support for Clinton in the Crimson.

“There was maybe one person who said something pretty nasty about it on Facebook and then got some comments that were also nasty,” she said. “But I don’t think that’s the prevailing way that the Bernie supporters act.”

Ho said that she would support the Democratic nominee regardless of who it will be, though it’s pretty much assured it’ll be Hillary Clinton. And no, Ms. Roberts—Sanders supporters are quite vicious, given their rambunctious behavior at the Nevada Democratic Convention, which led to the state Democratic chair getting death threats.

Yes, these liberals got a little taste of what conservatives go through on college campuses across the country. It’s not good, and these Clinton supporters should be able to voice their opinions without being viewed as traitors. At the same time, maybe they can empathize with their more right-leaning peers, what few of them might be on campus, and their struggle to be who they want to be without being harassed.