Bloomberg News: So, Romney Is Giving A Third Party Bid Another Look 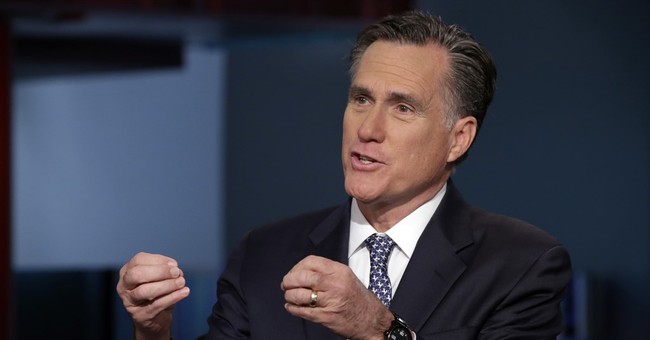 Like a pinball machine, Mitt Romney might be considering (again) to jump into the 2016 ring by running as an independent. Earlier this month, the former Massachusetts governor and 2012 candidate met with The Weekly Standard’s Bill Kristol, where a third party bid was discussed. Kristol is one of the many conservatives in the Never Trump camp, despite the billionaire real estate magnate clinching the number of delegates needed to become the 2016 Republican nominee. Politico’s Mike Allen had noted in Playbook that there was a 50-50 chance that Romney, Sen. Ben Sasse (R-NE), or former Oklahoma Sen. Tom Coburn would run as an independent. Sasse and Romney reportedly said they were not considering a third party bid, but Kristol said that he might be coming around to it on Bloomberg Politics’ Masters in Politics podcast:

The Weekly Standard editor said on Bloomberg Politics' Masters in Politics podcast that Romney, who has been highly critical of presumptive Republican presidential nominee Donald Trump, is contemplating a third-party White House run. Kristol, one of the most prominent Republicans in the “Never Trump” camp, said that while Romney initially ruled out another presidential bid, he may be coming around to the idea.

Reached via e-mail, a Romney spokesperson declined to comment on Kristol's assertion.

Kristol said he believes that a general-election matchup between Democrat Hillary Clinton and Trump sets the stage for a third-party candidate like Romney, 69, to have a legitimate shot at winning.

Kristol discussed the fact that Romney has expressed reservations about entering the race. “I spoke to him about three weeks ago, and we talked more generally about the situation. I expressed that I'd of course be for him, against Clinton and Trump,” Kristol said. “He had the very sensible reaction and he said this publicly, ‘Look you know, it's someone else's turn. Surely it would be better if a young person comes on and says, I'm carrying this banner here.’”

Still, Romney is drawn to the prospect of offering himself up as an alternative to Trump and Clinton, according to Kristol. “I think he thinks someone should do it,” Kristol said. “And I think that he thinks that maybe he is the right person to do it. He has the national stature and name ID, access to resources.”

Romney did have a somewhat solid showing in a poll showing a three-way race. Clinton led 37/35/22 over Trump and Romney respectively.

Still, there are questions about ballot access, which would mean that Romney would have to piggyback on smaller parties that already have that access, and convince the leadership of those respective parties to be accomplices in stopping Trump. Yet, there’s also the most obvious reason. In 2012, Romney ran against the eminently beatable Obama and lost. Moreover, the Democrats are divided as ever right now—why would we want to invite that on our side with a third party bid that would only end splitting the conservative movement down the middle? These are the cards we’ve been dealt—some of us may not like it, but there it is. Trump is our nominee. Instead of focusing on other right-leaning alternatives for 2016, why not focus that attention on attacking Hillary? The words President Hillary Clinton should scare conservatives to death. You don’t have to be for Trump, but you should at least devote ample time to attack the candidate whose agenda we all know she’d implement on day one in the Oval Office. You don’t have to fall in love with Trump, but third party bids are rarely successes. Maybe it’s time for us to focus less on Never Trump (because he’s already crossed the 1,237 delegate mark) and move aggressively into the Anti-Hillary camp.