Brady Campaign Furious That Schumer Didn't Push Gun Control, So We Have Another Background Check Bill 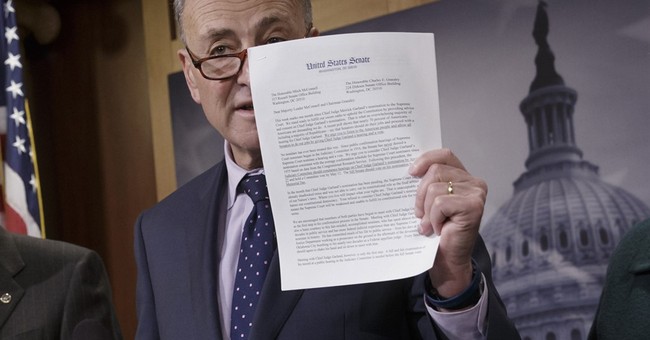 Sen. Chuck Schumer (D-NY) moved quickly to announce some sort of gun control proposal after it was reported that the Brady Campaign to Prevent Gun Violence was more than disappointed with the liberal senator’s lack of gusto on the issue of gun control (via the Hill):

"He made a promise to a room full of advocates, leaders, and gun violence victims last fall in New York to bring an expanded background check bill to the floor this year,” said Brady spokesman Brendan Kelly. "With the first quarter down, he hasn't done it.”

Brady is one of the largest gun control groups, but other activists have yet to complain about Schumer.

Schumer has spoken at numerous gun control events, including Brady’s 20th anniversary and its New York Gala. The group hopes to pressure him into leading the charge for expanded background checks.

That was yesterday morning, and by the afternoon—the Hill reported that the senator was going to push another expanded background check bill, which will surely met yet another legislative death for Democrats on this issue. The Brady Campaign directed more than 1,000 calls towards Schumer’s office yesterday.

It may not seem much now, but this is a preview of what could happen if Republicans lose Congress this year. That loss, coupled with a Clinton win in November, could spell certain doom regarding Second Amendment rights. We know universal background checks aren’t the answer—mass shooters have been to unleash their senseless violence on innocent people even with this law in effect at the state-level. Moreover, most private sales aren’t necessarily ones between private citizens; it’s between family members (i.e. fathers giving their guns to their sons, which technically is a transaction). Democrats, by and large, recognize this, so they add exemptions for family members, which then undercut the whole reason for why we’re engaging in this folly of political window dressing. If this was a bill addressing mental health, increasing incentives for states to include those records in the National Instance Criminal Background Check System, and streamlining reporting of mental illness (along with improving care), then maybe this could have been a serious discussion. But, again, Democrats have misfired.