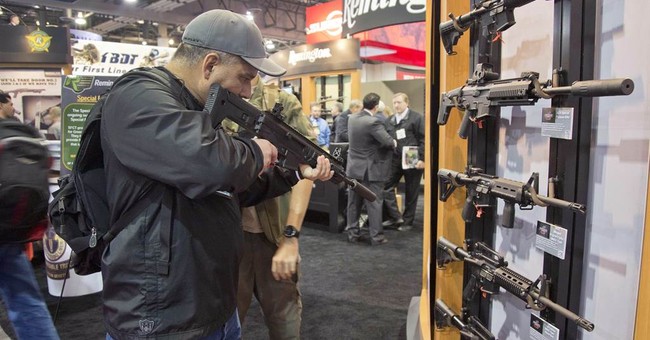 Well, there appears to be a consensus among American voters when it comes to lawsuits filed against gun manufacturers and dealers over gun violence: they don’t support them. That’s right. The overwhelming majority of Americans do not support suing the gun industry over mass shootings; therefore, they don’t support repealing the wonderful Protection of Lawful Commerce In Arms Act (PLCAA) that gives firearms manufacturers much needed legal protection against anti-gun liberals (via NSSF):

Seven of 10 American voters do not support allowing crime victims to sue firearm manufacturers and retailers when firearms they made or sold lawfully after background checks are used illegally in crime. Instead, voters from across political parties and geographic regions back the defense that the Protection of Lawful Commerce in Arms Act (PLCAA) provides the firearms industry.

More than 70 percent of voters disagree with a position one presidential candidate has made a centerpiece of her campaign. Like that candidate, others running for federal office have chosen to run against and misrepresent this decade-old law that prevents crime victims from suing firearm manufacturers and retailers who have not broken any laws.

These findings were among the results of a national scientific poll of 1,000 registered voters conducted in mid-April by Harper Polling and released today by the National Shooting Sports Foundation® (NSSF®), the trade association for the firearms and ammunition industry.

A majority of voters in all regions of the country say the statement about keeping PLCAA more closely reflects their opinion (Midwest: 70 percent, Northeast: 64 percent, South: 73 percent, West: 75 percent). This holds true even for a majority of those who cast a vote for President Obama in the last election (53 percent) and for a majority of non-gun owners (56 percent).

“The concept that an entire industry should not be held liable for the criminal or negligent use of products made and sold legally clearly makes sense to the overwhelming majority of the American public, as these poll results demonstrate” said Lawrence G. Keane, NSSF Senior Vice President and General Counsel.

Unlike the lies peddled by Hillary Clinton, the PLCAA isn’t an absolute legal shield. If a gun manufacturer, or dealer, allows a firearm to fall into the hands of a known criminal, and that felon subsequently uses the firearm in a crime that results in a fatality, then the victim’s family can rightfully bring those parties into court. In 2015, a jury awarded two Wisconsin police officers $5 million after they suffered severe injuries from being shot by a handgun sold during an illegal transaction. The dealers who sold the gun were found to be negligent in picking up signs that the firearm was part of a straw purchase.

When Adam Lanza’s mother, Nancy, bought an AR-15 rifle, it was never intended to be used in a mass shooting that left 20 school kids dead in 2012. Lanza murdered his mother and essentially stole her firearms to commit his heinous act. That’s not the fault of the dealer. That’s not the fault of Remington Arms, which is at the center of a pivotal legal battle that could create the foundations for lawsuits against any manufacturer that makes the AR-15; a rifle that is owned by millions of Americans. The trial date is set for 2018.

Friendly Reminder: Support for gun rights is at a 25-year high; gun homicides are at record lows; and support for so-called assault weapons bans has flipped, with more Americans opposing this frivolous gun control policy than supporting it. Progress is beautiful.