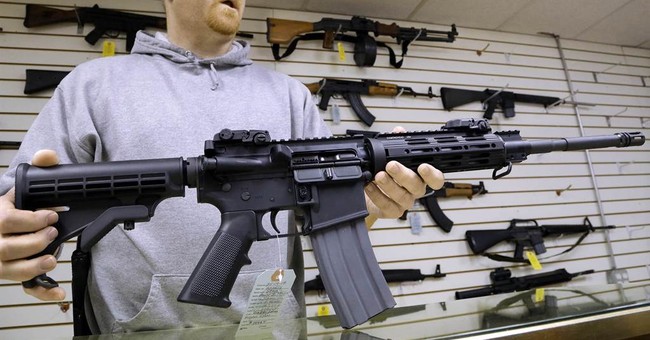 Yesterday, House Democrats once again decided to introduce legislation to ban assault rifles (that has zero chance of becoming law) (via the Hill):

Following a string of recent mass shootings, Rep. David Cicilline (D-R.I.) is looking to renew the assault weapons ban that was originally signed by former President Bill Clinton but expired more than a decade ago.

The Assault Weapons Ban of 2015, which Cicilline will introduce Wednesday afternoon, would ensure that no such guns are manufactured while placing new restrictions on the sale of already existing assault weapons.

It has no hope of passing through Congress, however, given opposition from Republicans.

“Assault weapons are designed for the sole purpose of killing as many people as quickly as possible,” Cicilline said in a statement to The Hill. "We need to do everything we can to reduce the toll of gun violence by keeping these weapons out of our communities.

Yet, unlike the aftermath of Sandy Hook, support for so-called assault weapons bans has dropped dramatically.

A majority of Americans oppose banning assault weapons for the first time in more than 20 years of ABC News/Washington Post polls, with the public expressing vast doubt that the authorities can prevent “lone wolf” terrorist attacks and a substantial sense that armed citizens can help.

Just 45 percent in this national survey favor an assault weapons ban, down 11 percentage points from an ABC/Post poll in 2013 and down from a peak of 80 percent in 1994. Fifty-three percent oppose such a ban, the most on record.

The breakdowns among region, age group, income, and education were interesting. Regarding education, only Americans with post-graduate degrees support a new ban on assault rifles; A majority of those, ranging from college graduates to only high school diplomas or less, oppose the new push to ban assault rifles. Fifty-nine percent of Millennials oppose a new ban on assault rifles, and it splits almost evenly (48/49) among those who live in urban areas that are typically liberal bastions. As for income, middle class and upper middle class voters oppose a new ban, those making less than $50k a year break evenly.

Of course, this is an unpopular piece of legislation, and, like the 1994 ban on assault weapons, it did little (if anything) This comes even after Americans did a heavy Google search about gun control after the San Bernardino shootings. The facts are clear; gun control doesn’t work. And, as crime statistics from the Department of Justice consistently say, rifles and shotguns are rarely used in crimes. It’s the best of Democratic Party window dressing, but I’m certainly not going to stop them from heading into the fire on this, or any other gun control legislation.

They’re only doing two things: 1. Mobilizing the tenacious legions of pro-Second Amendment supporters for next year's elections and 2. Causing gun and ammo sales to spike.