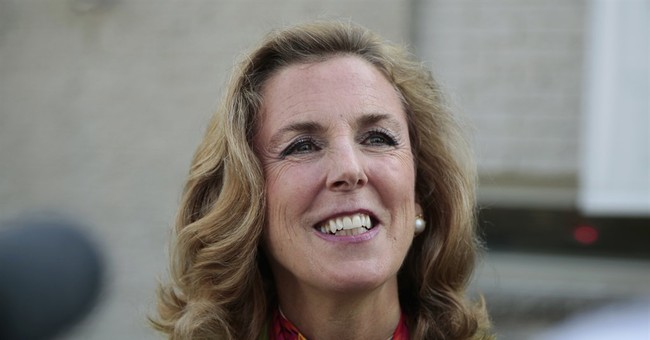 Former Democratic Pennsylvania Rep. Joe Sestak tried to set up a rematch with his 2010 rival, but it looks like that’s not going to happen. Katie McGinty, the former Chief of Staff to Pennsylvania’s Democratic Gov. Tom Wolf, soundly defeated Sestak in the Pennsylvania Democratic primary 42/32. Jon Fetterman, the mayor of Braddock, came in third with 20 percent of the vote.

Sestak earned the ire of national Democrats when he decided to ignore calls for him not to challenge the late Republican-turned-Democratic Sen. Arlen Specter six years ago. Sestak beat Specter, but was unable to overcome that year’s Tea Party wave that allowed Pat Toomey to clinch sweet victory in the end.

Toomey has since toed a more pragmatic line, while putting his political reputation and career on the line in support of expanded background checks after the horrific Sandy Hook shooting in December of 2012. The bill, co-sponsored by Sen. Joe Manchin (D-WV), eventually died in the Senate, but Toomey added that he has zero regrets over pushing the legislation, and that he would do it all over again “in a heartbeat.” This isn’t what you want to hear if you’re a staunch Second Amendment supporter (in fact, this is quite horrifying), but in the Philly suburbs–where elections are decided in the state–this is common sense policy.

Nevertheless, while Toomey seems vulnerable, given the dynamics of the state, Hillary at the top of the ticket, and increased voter turnout–you would think this would be smooth sailing for Democrats. Think again. McGinty got the establishment’s support and money. This is partially due to folks in Democratic circles still having doubts about Sestak’s ability to beat Toomey. Also, there are still some raw feelings within Democratic circles over what many see as the former congressman sabotaging what could’ve been an easier seat to defend; Specter had defeated Toomey in past primary contests. According to Politico, Obama’s late endorsement of McGinty may have tilted the race in her favor:

McGinty won endorsements from President Barack Obama, Vice President Joe Biden, Gov. Tom Wolf, Sen. Bob Casey, the DSCC, EMILY’s List, and a host of other powerful Pennsylvania and Washington Democratic figures and groups. The DSCC joined EMILY’s List in spending millions of dollars on outside ads boosting McGinty, a rare move for a party committee prompted by Senate Democratic leadership’s poor relationship with Sestak and its belief that McGinty would be a better nominee.

Sestak, the party’s 2010 nominee, started ahead in the polls, but the late deluge of ads — many featuring Obama’s endorsement — swung the race to McGinty late.

So, in this key Senate race, it’s McGinty v. Toomey. And Toomey is leading by comfortable margins over McGinty in most polls take since May.