ICYMI: The Largest Coal Company In The U.S. Filed For Bankruptcy Thanks To Obama's Regulations 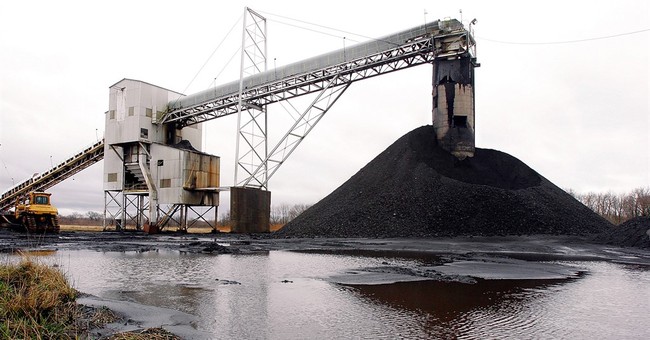 President Obama’s war on coal continues to take scalps, as Peabody Energy, the nation’s largest coal company, recently filed for bankruptcy. President Obama has made it clear that his regulatory agenda will make it very expensive for companies who continue to utilize coal to power America’s massive infrastructure and economy. If he succeeds, over 125,000 jobs could be lost, along with $650 billion in economic activity over the next ten years. Last week, Peabody added its name to Obama’s butcher’s bill (via CNN):

Peabody Energy, the world's largest private-sector coal producer, filed for bankruptcy on Wednesday in a U.S. court, citing "unprecedented" industry pressures and a sharp decline in the price of coal.

The company said it will continue to operate while in bankruptcy, while working to reduce debt and improve cash flow.

In addition to plummeting coal prices, the company cited weakness in China's economy, overproduction of domestic shale gas and ongoing regulatory challenges as reasons for its declining prospects.

Peabody reported a loss of $2 billion last year. Revenue tumbled 17% to $5.6 billion as the average price and amount of coal that it sold fell. It warned of further declines this year due to reduced use of coal by U.S. utilities, along with lower demand from overseas markets.

Shares of Peabody (BTU) have already plunged more than 75% this year to trade near $2. The company has roughly 7,600 employees.

Without a doubt, market forces, along with increase natural gas production, have hurt coal, but it’s not as crushing as Washington red tape. American Action Forum crunched the numbers and found that Obama, the Department of the Interior, and the Environmental Protection Agency has added $312 billion in costs, along with more than 30 million hours of additional paperwork to keep up with those regulations. They added rules, like the Cross-State Air Pollution Rule and MATS (mercury and air toxics standards), would impose $20 billion in annual regulatory burdens alone.

On the other hand, there are some who say that coal production will keep up with global demand–it’s just that the entire industry will undergo a restructuring in how that market is financed. So, sorry green warriors, coal is here to stay, unless, as Slate’s Daniel Gross noted last year–they buy coal mines from companies in financial trouble, close the mines, and end the industry completely. So, there’s a glimmer of hope, I guess. Still, the graphic from AAF doesn’t paint a pretty picture for the future of coal, especially if Hillary Clinton wins the presidency. The best thing for coal, for the future of America’s energy needs, and the communities that survive on mining this bountiful resource is for a Republican to win in November.

Peabody is in dire straits, as is Arch Coal, the nation’s second largest coal company, which has already filed for Chapter 11, according to MRCTV’s Brittany Hughes. If the Supreme Court, which issued a stay of the power plant regulations, rules Obama’s Clean Power Plan agenda legal, then millions of Americans would be relegated to economic destitution. Many millions more, including rural America, the middle class, and fixed-income seniors, will have their home budgets torpedoed thanks to increased energy costs. In some ways, the fight over coal and the president’s Clean Power Plan is just as intense and far-reaching as the fight over Obamacare.