Trump Campaign Manager Will Not Be Prosecuted For Battery 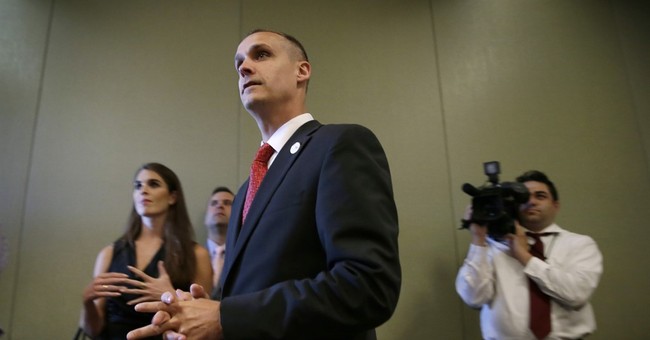 There isn’t going to be a bloody legal fight between former Breitbart reports and the Trump campaign. Fields filed battery charges against Trump’s campaign manager Corey Lewandowski, who physically grabbed the reporter while trying to ask the billionaire magnate a question about affirmative action in March. At the time, Trump was leaving a press conference in Jupiter, Florida. Politico reports that there will be no prosecution:

A Florida prosecutor has decided not to prosecute Donald Trump’s campaign manager for battery after a March run-in with former Breitbart reporter Michelle Fields, sources with knowledge of the situation told POLITICO.

The decision not to press charges against Corey Lewandowski is scheduled to be announced on Thursday afternoon by Palm Beach County State Attorney David Aronberg.

Fields may still pursue a defamation case against Lewandowski, a source said.

Fields filed a police report last month after Lewandowski grabbed her by the arm and moved her out of Trump’s way following a press conference at Trump National Gold Club in Jupiter. She said he left bruises on her arm. Police later charged Lewandowski with simple battery, releasing video from surveillance cameras that shows Lewandowski reaching for and grabbing Fields.

Trump supporters thought Fields was lying, Fields supporters felt this incident not only warranted Lewandowski to be dismissed from the campaign, but also encapsulated the culture Trump encourages among his staff. On social media, it wasn’t much better, as both camps dissected the security camera footage with various telestrator sketches. While Trump said he backed Lewandowski, his role on the campaign has been reduced.