Obama SCOTUS Nominee Says Judges Must Follow the Law, Not Make It 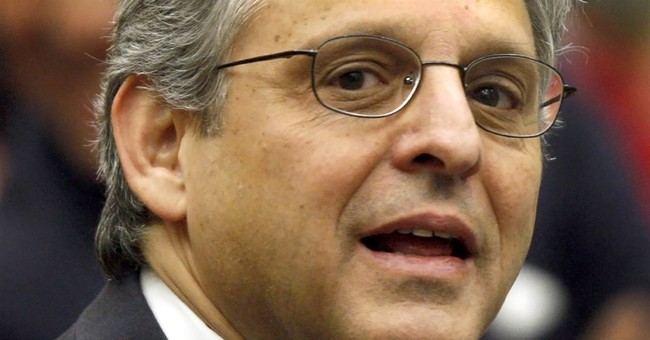 As Katie wrote earlier today, President Obama nominated Chief Judge of the D.C. Court of Appeals Merrick Garland to the Supreme Court. At the press conference, a visibly emotional Garland said that besides his wife, Lynn, agreeing to marry him, this is the greatest honor of his life.

He said that his family deserves much of the credit for the path that led him here, though he offered a humorous anecdote that he wished one of his daughters wasn’t so adventurous; she was hiking on a trail­–out of cell phone range–so he was unable to inform her of his nomination. He then wished that his father could be here.

Pivoting to this professional career, he talked briefly about his time at the Justice Department, where he was sent to Oklahoma City after terrorist Timothy McVeigh blew up a federal building, leaving 168 dead in 1995. He said that he saw what happens when someone abandons the justice system to address grievances. Yet, it also showed how the system could be trusted to deliver justice.

As a judge, Garland said that those decisions must be grounded in the law. He said that “fidelity to the constitution” and to the law has been a cornerstone of his professional life; judges must follow the law, not make it.

Still, it doesn’t appear that the Republicans are going to budge, even though Garland has bipartisan appeal. That, coupled with his impeccable credentials, is aimed to place pressure on Senate Republicans by the Obama White House to move from their no confirmation at all costs position. It appears that there are no cracks in the wall, yet (via Politico):

Given previous opposition from powerful Republicans like McConnell and Grassley, a senior GOP aide said it would not be difficult for Republicans to stonewall Garland.

This is an easy one. Both our Leader and Judiciary Chairman voted against him when he was confirmed before," the aide said. "And it’s a clear recognition by the White House that we mean what we say: there will be no confirmation. If they thought we were going to cave, they would have put up a much different candidate."

Still, seven current GOP senators voted to confirm Garland, and Democrats are sure to level charges of hypocrisy against them if they stick with McConnell's plan to blockade any nominee. Sens. Dan Coats of Indiana, Thad Cochran of Mississippi, Susan Collins of Maine, Orrin Hatch of Utah, Jim Inhofe of Oklahoma, John McCain of Arizona and Pat Roberts of Kansas all supported the nomination in 1997.

But Republicans have been clear for weeks that they will block Obama's pick, regardless of qualifications. They've vowed to wait for the “voice of the people” to be heard in November before even considering the next justice, for fear of confirming a nominee that could tilt the court leftward for years to come.

Speaker Ryan said it was never about whom Obama’s anticipated nominee would be:

“This has never been about who the nominee is. It is about a basic principle. Under our Constitution, the president has every right to make this nomination, and the Senate has every right not to confirm a nominee. I fully support Leader McConnell and Chairman Grassley's decision not to move forward with the confirmation process. We should let the American people decide the direction of the court."