Fight Night: Rubio Brings Trump University Into The Fray; One Instructor Was A Manager At Buffalo Wild Wings 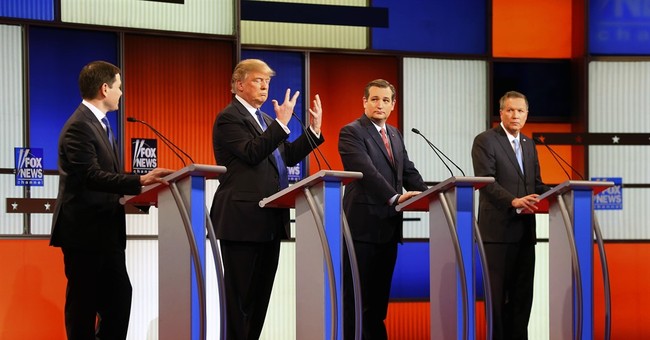 National Harbor, MD– Townhall Media is hosting a debate watch party tonight at the annual Conservative Political Action Conference, where Sens. Ted Cruz (R-TX) and Marco Rubio (R-FL) are throwing punches at Donald Trump, hitting him over his past business failings, especially Trump University. In a tense exchange with Rubio, Guy mentioned to the audience in the Potomac Ballroom that the billionaire was baited into admitting that he gave refunds to those who attended his now-defunct institution–with the Florida senator noting that one of its instructors was a manager at a Buffalo Wild Wings. Not exactly hiring the best, which is a go-to point the billionaire magnate makes on the campaign trail (via NYT):

The now-defunct Trump University, the subject of one of Marco Rubio’s attacks on Donald J. Trump at the Republican presidential debate on Thursday night, was not a real university at all but a series of seminars held in hotels across the country that promised to share Mr. Trump’s real estate investing acumen with students. It is still embroiled in lawsuits accusing it of misrepresentation.

As many as 7,000 people across the country bought the sales pitch, spending an estimated $40 million. Both the State of New York and many of the students are now suing Mr. Trump for misrepresentation. Three cases are pending: one in New York brought by the attorney general and two in California, certified as class actions.

In fact, the cases against Mr. Trump have not been resolved. One of those that remains pending was filed in 2013 by the New York State attorney general, Eric T. Schneiderman. It accuses Trump University of running a “bait and switch” scheme and said widely distributed advertisements for the program were replete with false claims.

One ad published at least 170 times across the country in 2009, according to Mr. Schneiderman’s office, promised that students would “learn from Donald Trump’s handpicked instructors, and that participants would have access to Trump’s real estate ‘secrets.’ ”

But an investigation by Mr. Schneiderman’s office found that Mr. Trump had little to do with picking instructors or developing the curriculums for the seminars, which were run largely by people with motivational speaking backgrounds who were compensated based on how many people they persuaded to buy additional seminars. One of them was a manager at a Buffalo Wild Wings.

So, Trump is getting beaten bloody tonight, but will it impact the polls? So far, the Donald has been the Teflon Don. Trump later labeled the lawsuit as a small civil case, and that we should see what happens when this case reached the end of its rope. This allowed Cruz to point out that this is the preview of the general election with Donald as our standard-bearer against the Democrats: a nominee saddled with a fraud case.

Rubio just baited Trump into admitting that he gave "lots" of refunds to Trump U scam victims! #GOPDebate