Rumor Mill: Rubio Planning To Take His Campaign All The Way To The Convention–Even If He Loses Florida 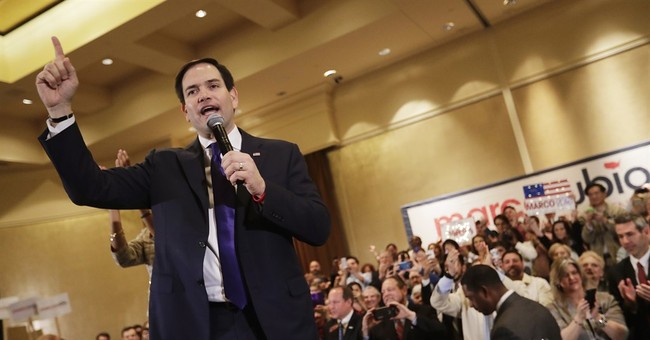 Even though Donald Trump is expected to do well tonight, sources with Sen. Marco Rubio’s campaign (R-FL) told National Review’s Elaina Plott that the senator plans to take his fight all the way to the convention in July. Many have noted that if Rubio loses his home state of Florida on March 15, his campaign is essentially finished. Rubio and Texas Sen. Ted Cruz will be duking it out for second place during Super Tuesday. Rubio seems to have gaining momentum, with endorsements and access to more campaign cash, though it could be too late. Nevertheless, these whispers from the Rubio camp seem to convey that the Florida senator’s campaign team feels that Trump won’t be able to get enough delegates to clinch the nomination.

Bloomberg reported that the Rubio camp was hitting that they could do better than expected, or possibly win, Minnesota, Oklahoma, Arkansas, and Virginia. Yet, over at Politico, a top Rubio adviser reportedly told donors to prepare for a rough night.

Per source, Rubio campaign on surrogate call pledged to go "all the way" to convention.

Announced Rubio is taking "a quarter million in donations a day."

Per source, Rubio campaign manager Terry Sullivan led call, said regardless of outcome tonight/Florida on the 15th, Rubio will stay in race.