No, Canada, ‘Machine Guns’ Aren’t Flowing Across The Border From The U.S. 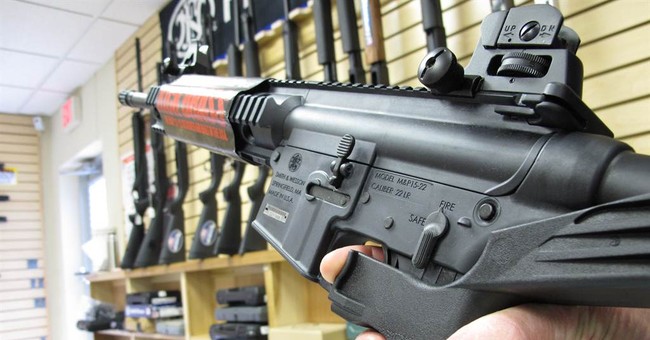 Earlier this month, The Washington Post reported on the issue of gun smuggling supposedly emanating from the United States into Canada, where machine guns and semiautomatic firearms, mostly handguns, are flowing into Canada and creating havoc. Canadian Liberal Prime Minister Justin Trudeau has called for tighter gun regulations to curb this problem:

Homicides in Toronto spiked to 80 in 2005, from 64 in 2004, and the majority were shooting-related. About 70 percent of the guns used were handguns and automatic weapons smuggled from the United States, police say.

Since then, the number of shootings has decreased, but the danger still lurks. How many trafficked guns cross the border is unknown. But the Canadian Border Services Agency said there has been a continued increase in gun seizures. In 2012, agents seized 226 illegal weapons (mostly handguns). By 2015, that figure had risen to 316.

Toronto Police Chief Mark Saunders told reporters in December that police had seized 11 machine guns, adding that he was worried about officer safety.

Trudeau promised in December to introduce stricter laws that would “get handguns and assault weapons off our streets.”

Canadian gun ownership is dwarfed by the estimated 357 million firearms owned by Americans, more than the U.S. population, according to a 2012 Congressional Research Service report and Washington Post estimate.

Yet, the article also mentioned that there are 10-20 million firearms owned by Canadians, which is a lot given that their total population is a little over 35 million. I’ll let Bob Owens at our sister site Bearing Arms set the record straight on the whole machine gun angle:

…automatic weapons have been tightly regulated in the United States since 1934, and have been outlawed entirely for civilian manufacture since 1986.

You heard that correctly. Outlawed. For 30 years.

The roughly 250,000 automatic weapons in the United States—one-half of which are owned by law enforcement agencies—are very tightly regulated, requiring an additional layer of background checks conducted by the ATF, a $200 tax stamp, and generally requires at least a 6-month wait before pickup after another NICS check.

U.S. regulations on machine guns in the National Firearms Act of 1934 (NFA) have been so successful in ensuring that only law-abiding citizens have registered machine guns that there have only been two criminal homicides with then in 82 years… and one of those was a crooked police officer using his issued weapon.

In addition to the NFA, the Hughes Amendment to the Firearm Owners Protection Act of 1986 (FOPA) outlawed the manufacture of machine guns for anyone other than military, law enforcement, and gun dealers serving those markets. There hasn’t been a single new machine gun introduced into the market in 30 years, so how are American gun laws responsible for Canadian criminals acquiring automatic weapons?

Owens also notes that the firearms used to commit crimes in Canada were probably never legal in the U.S. market from the outset. As with anything relating to gun control politics, the criminal element will always obtain firearms if they need them–and it’s most likely going to be through non-legal channels. Yes, I know most of you already know this, but we must repeat it so it sinks in with our liberal friends. More gun laws don’t save lives; it just keeps the law-abiding more vulnerable. And this whole U.S.-Canada machine gun flow is just patently false.